Mobile solutions
Home solutions
Have a phone you love? Get up to $500 when you bring your phone.
$500 via Verizon e-gift card (sent w/in 8 wks). Activation of 4G LTE/5G phone on One Unlimited for iPhone (all lines on account req'd on plan), 5G Do More, 5G Play More or 5G Get More plans req'd. Device must remain active for 45 days. $500 charge back if service cancelled w/in 12 mos or eligibility req's are no longer met. See vzw.com/bring-your-own-device for details.
end of navigation menu
Help
Sign in
Turn on suggestions
Auto-suggest helps you quickly narrow down your search results by suggesting possible matches as you type.
Showing results for
Search instead for
Did you mean:
More Options
Correct Answer!
Ellipsis 8 Restarts When Updating Google Slides

This is a topic that has been raised on the Google forums:

However, Google have punted the issue as "works on other devices so must be device specific".

Google Play wants to update Google Slides to 1.18.132.08.30 version and after a few minutes into the process the tablet restarts. The update never completes. I have attempted this a dozen times or so.

NOTE: Everything is up to date on my tablet except for Slides. I have tried factory reset multiple times. I have cleared cache. I have cleared data. I have stood on my left foot only while reciting the secret incantations on days of the month that are prime. Nothing has made a difference.

The Google Play store claims my device is compatible but nothing has allowed the update to succeed and, of course, I can't use the previous version as Slides will complain that the version on my tablet is no longer supported.

It seems like a recent update to Slides is making it incompatible with the Ellipsis 8 and Google forum has punted the issue to elsewhere.

Am I just out of luck with Slides on the Ellipsis 8 now?

Oradim, that is very strange that you aren't able to access Slides. With this being a device specific issue with the Slide app I would recommend you reaching out to Google Play support to report your issue. I have included the link https://support.google.com/googleplay/answer/7100415?hl=en I hope this helps.

Part of the runaround is that Google sent me to Verizon, so that is why I posted here. Frankly, I have very low hope that an issue like this will be resolved via forums. That is not meant in a derogatory way - I only mean that an app incompatibility issue is not easily debugged via forum postings. My only hope was it might be a known issue with this tablet (and, of course, ideally with some solution.) I will try again to reach out to Google via a different channel. Here's what I get when I try to start Slides: 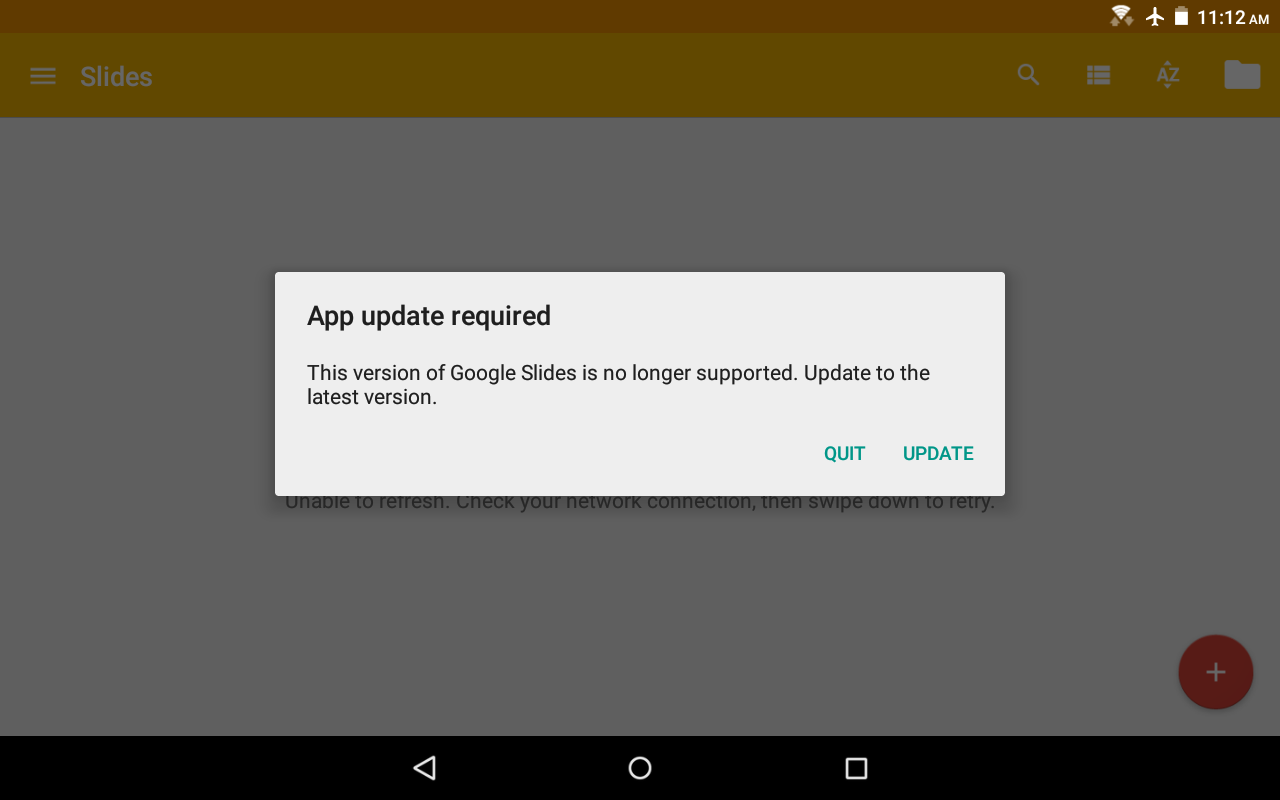 Since the update never succeeds and always (as of today) results in a tablet restart, Slides is not usable.

We want you to have a resolution just as much as you do. Since the concern is with the app directly, Google would be your next best step.

I hope this is beneficialKatiM_VZW
Follow us on Twitter @VZWSupport
If my response answered your question please click the �Correct Answer� button under my response. This ensures others can benefit from our conversation. Thanks in advance for your help with this!!

my tablet started doing the same thing, then the tablet no longer could read the sim card, it started "optimizing all the apps" several times a day, now it won't go past the "ellipsis powered by android" screen when powered on. sorry buddy, but your tablet is probably biting the dust

We want to make sure you are all set with your device and have a working tablet. I wouldn't want those messages on my device as well. Let's review this more to find a solution for you. Prior to this occurring has there been any recent updates on your device.

JasperM_VZW
Follow us on Twitter @VZWSupport
If my response answered your question please click the �Correct Answer� button under my response. This ensures others can benefit from our conversation. Thanks in advance for your help with this!!