Help
Sign in
Turn on suggestions
Auto-suggest helps you quickly narrow down your search results by suggesting possible matches as you type.
Showing results for
Search instead for
Did you mean:
More Options
Correct Answer!
Bait and switch

Yesterday I wanted to take advantage of the BOGO offer that Verizon is currently offering. I admit that at first I just went through the upgrade process for my device. I then went through the process to upgrade my husbands device. The option I was presented with was "upgrade current device" or "add a new line". I clicked the upgrade option. Figured I was getting the BOGO. No warning that was not the case. I then was presented with a checkout page with a total due monthly listed. Cool, it was a great deal. I was then presented with a Place Order page with the same total monthly due listed. Awesome. However my order confirmation showed completely different numbers.

It was at this point I contacted an agent via chat to cancel the order. I felt like it was a bait and switch (it was!). Was told by the agent no problem, order was cancelled. Next I get a shipping notification. I contact an agent again and was again told no problem, order was cancelled. However I keep getting shipping updates and my bill now shows me being on the hook for new the new devices.

Verizon does not want to seem to help. I feel lied to (being told the order was cancelled). These phones are going to show up Monday.

Can I refuse them and send them back? I donʻt think I should be on the hook for the restocking fee as I cancelled the order after the Total Monthly Due changed from when I placed the order to when it was confirmed.

I know Verizon doesnʻt care. I am just one customer with two lines of service. But my husband is an I.T. DIrector for a government organization. And his public safety staff have been asking to move to ATT and FirstNet. And this has left a very bad taste in his mouth. So much so that he is going to contact ATT after the first of the year for service quotes on over 150 lines.

Dear Verizon - please make this right. Honor the Total Monthly Due that was initially presented to me. I have screenshots and will be happy to send them to you.

Labels (1)
Labels
I have the same question
0 Likes
Reply
23 Replies
Correct Answer!
Re: Bait and switch

Just chatted with ANOTHER agent who said, "yeah it shipped, it shouldn't have - just refuse the shipment". However my bill is now a mess. Agent said they couldn't help me and told me to call the Care Team. Said Care Team was available Sa/Su from 8a-9p. I called the Care Team and was met with a recording that I was calling outside business hours. It's 9:13am. On Sunday. Which is within the window I was quoted.

Verizon does not care.

Not bait and switch. All BOGOs require a new line of service and it has been that way for a long time and it states it on the website. Can't be bait and switch when the terms on right there in front of you.

Fair enough. However the terms were not right there in front of me. I would have had to click the info button, which I did not. My bad. It is my believe that Verizon should have 1. Warned me when I selected an already active line that the BOGO did not apply 2. Showed exactly what the monthly total would be at checkout which would have alerted me to the issue and 3. Cancelled the order when they said they did. Twice.

The fact that I have had to spend so much time on this is frustrating. And will have to continue to spend time on this as well to fix my bill.

Just like the buy one get one can sale at stop and shop, you have to meet the requirements to get the deal.  Since the requirements are on the sales page, it’s best to read the promotions.  (See photo) 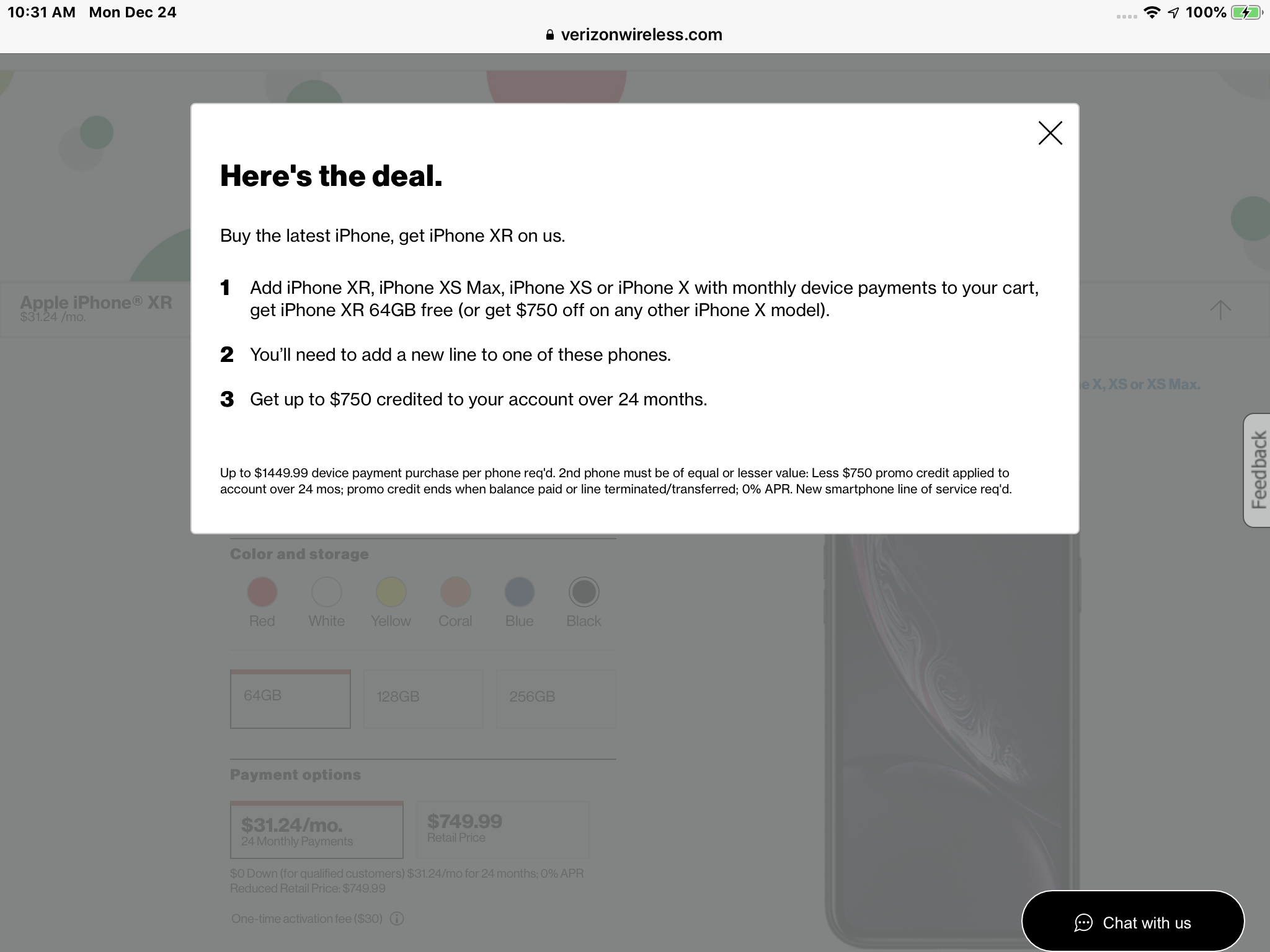 They don’t need to “warn you”.   You had every right to upgrade two lines and keep your numbers.  (And not get a deal)  Most people do it that way as they don’t want to lose their numbers.  It’s up to you if you want a deal, to read the requirements.  It’s $750 off a phone, you should be looking for the catch.

I didnʻt get that pop up. Sorry.

I found out what the catch is. Here is what the order summary said. Total due monthly was different in the email I received. In addition, order should have been cancelled and my bill not effected when I learned of the error and alerted Verizon. I had two agents basically lie to me and tell me the order was cancelled, see below. The order was not cancelled and I am being charged for it. Not how I want to spend Christmas Eve. Thanks for all your helpful comments though. 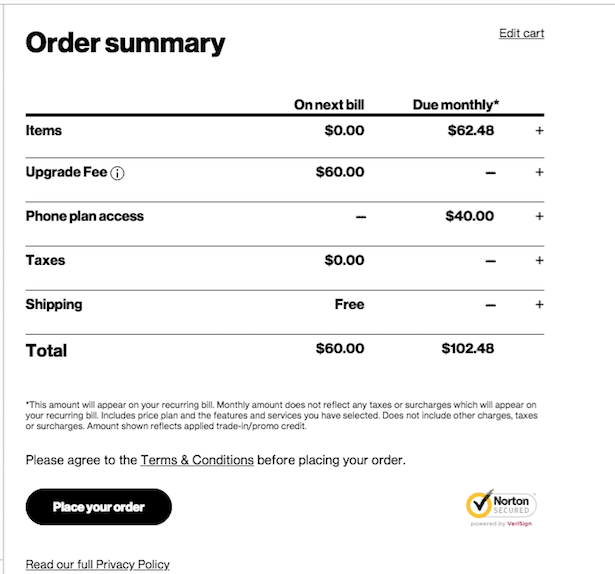 I just want to close the loop on this. I finally was able to talk to someone at Verizon. Everything was resolved to my satisfaction. I will remember to read the fine print next time.

You didn't get it because you CHOSE not to read the terms. It's called doing your due diligence