Help
Sign in
Turn on suggestions
Auto-suggest helps you quickly narrow down your search results by suggesting possible matches as you type.
Showing results for
Search instead for
Did you mean:
More Options
Correct Answer!
How do I file a complaint and seek resolution with Verizon Corporate office?

Note, I have already written a formal dispute to the Verizon Correspondence Team but have not received any kind of correspondence back and I don't know where to go from here. Here is my formal complaint.

Throughout the chat experience, Christopher assured me that I would be getting the $5 month promo deal after directly asking him in the chat. I wanted to make sure I was getting the deal. I would not have gotten then deal had I had known I would be charged full price for both phones. He was aggressively trying to up sale me on add on bundles, but I do understand that is what they do. We finished out the transaction online and through chat correspondence. I never thought any more about it until I began looking at my bill online and noticed that next month bill showed full price payments for both phones.

On 6/19/20, I placed a call back request to remedy the situation. I spoke to a representative about my issue and billing error. The representative I spoke with stated that it was a mistake and that promo $5/month for iPhone XR does not apply to our current phone plan (The new Verizon Plan Unlimited). She told me that there was nothing she could do about $5/month promo unless I upgraded my current plan to the “Play More” plan which would make my bill go up. Something I was trying to avoid in the first place. She put me on hold to look further into what she could do and offered a BOGO promo instead. I told her that I was still paying more than what was promised. I asked to speak with a supervisor, and she stated that they would tell me the same thing multiple times. I requested to speak with supervisor anyway. She put me on hold and did check in and told me that I was next in line to speak with a supervisor (on two different occasions), however the call was hung up or dropped. She took down my number before call was dropped. However, she did not call back. Total time on first phone call 1 hour and 8 minutes.

I tried to speak with a representative (Ashley) through Verizon Chat but she referred me to the call line. I tried again to call. I spoke with Karemen this time. He told me the same information and apologize for the misinformation. He said I would have to change my plans to get the promo and would cost me more money if I did. I asked to speak with a supervisor again. He said he would transfer me to a supervisor and waited on the line on hold. He checked in periodically until a supervisor came on the line. Spoke with supervisor Maggie (from Arkansas). She told me that same thing that the previous representatives told me. She said that Christopher was wrong about the information he gave him. She stated I would have to change my plan and increase my bill to get the promo which make no sense. I told her that even on the website there is no information stating what the promo requires “premium” or specific Unlimited plans to qualify for the promotion offers. The website is very misleading. I told her it was very vague. Nowhere on the website does it stated that you must have “X” plan to qualify for the promo. She agreed. I asked her if she could review the chat log to see what he wrote to verify his misinformation. She said that she could not view the chat logs. After she was unable to remedy my situation, I asked her what steps I can take to fix this problem. She said I would need to write a formal dispute to Verizon (attn. Correspondence team) to get a release of chat logs I had with Christopher. She said that if he stated I would get the promo Verizon would honor it. Total time on second phone call 1 hour and 28 minutes. Hence, my current letter and situation. We have been Verizon customers for a very long time and never had any problems before. I am extremely appalled by the dishonesty given from one of your representatives. I hope this issue is addressed with upper management before other customers are treated the same. I feel like Christopher only wanted to make a sale and said anything to get that. I have added screen shots below of order confirmation chat screen with Christopher and promotion information of the website stating the $5/month deal. I look forward to your prompt response.

Tags (3)
1 person had this problem.
I have the same question
1 Like
Reply
5 Replies
Correct Answer!
Re: How do I file a complaint and seek resolution with Verizon Corporate office?

Do you still have the promotion terms?  Did it say installments would receive credits in 1 to 3 months?  (Like other promotions)

So here is wha I found on the deal 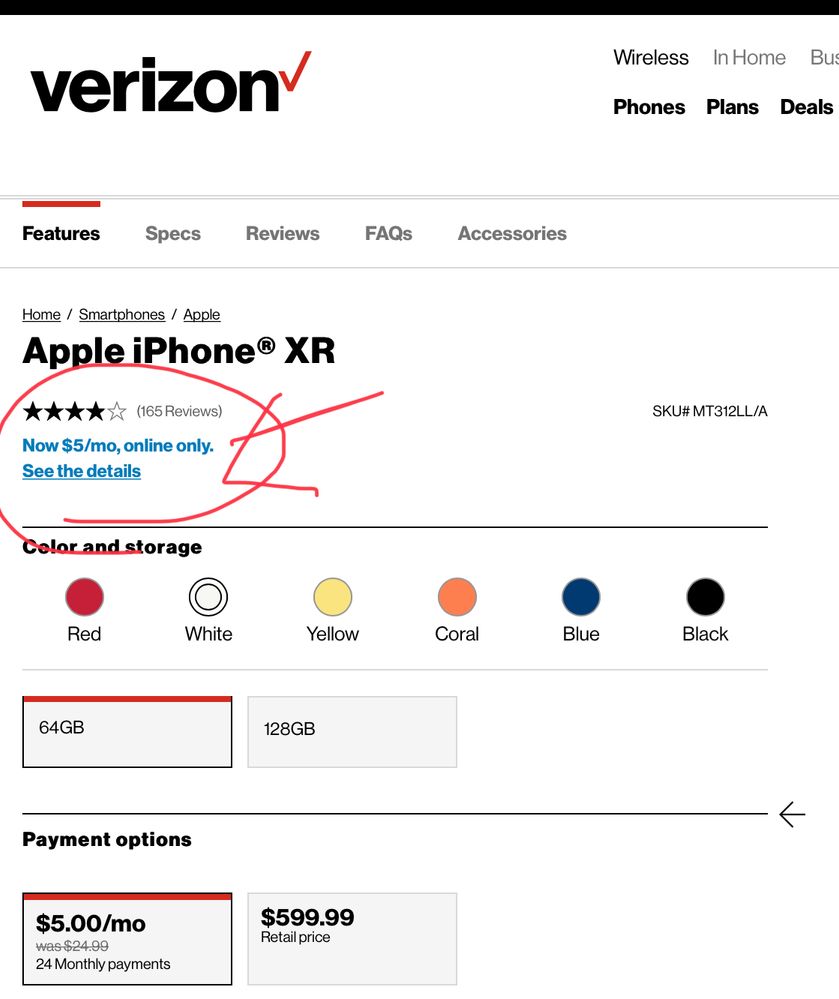 Yep, that's the promo deal. I have Unlimited plan, added two new lines and purchased order online. During the online chat, I asked the chat representative multiple times if the $5 deal would apply to my account and Unlimited plan I have and he reassured me it would. Thanks

We have the same exact issue.  We were taking advantage of the special deal for $5 a month and representative did not indicate we had to change plans or anything else.   Have you heard back on this problem?

if you met all the conditions at the time of purchase then contact Verizon, or file a Better Business Bureau complaint.

If you did not meet the requirements by having an unlimited data plan, the deal is void and it is entirely up to Verizon whether they allow you to switch now to get the deal After the fact.