Help
Sign in
Turn on suggestions
Auto-suggest helps you quickly narrow down your search results by suggesting possible matches as you type.
Showing results for
Search instead for
Did you mean:
More Options
Correct Answer!
Mid-island 31522. Service always bad and getting worse -

Only use phone on wifi - drops calls, never more than 1 bar.  What can be done - and please don't suggest signal booster. Comcast is less reliable than you - no real help there.  Need to have someone take a look at these towers - four? nearby. 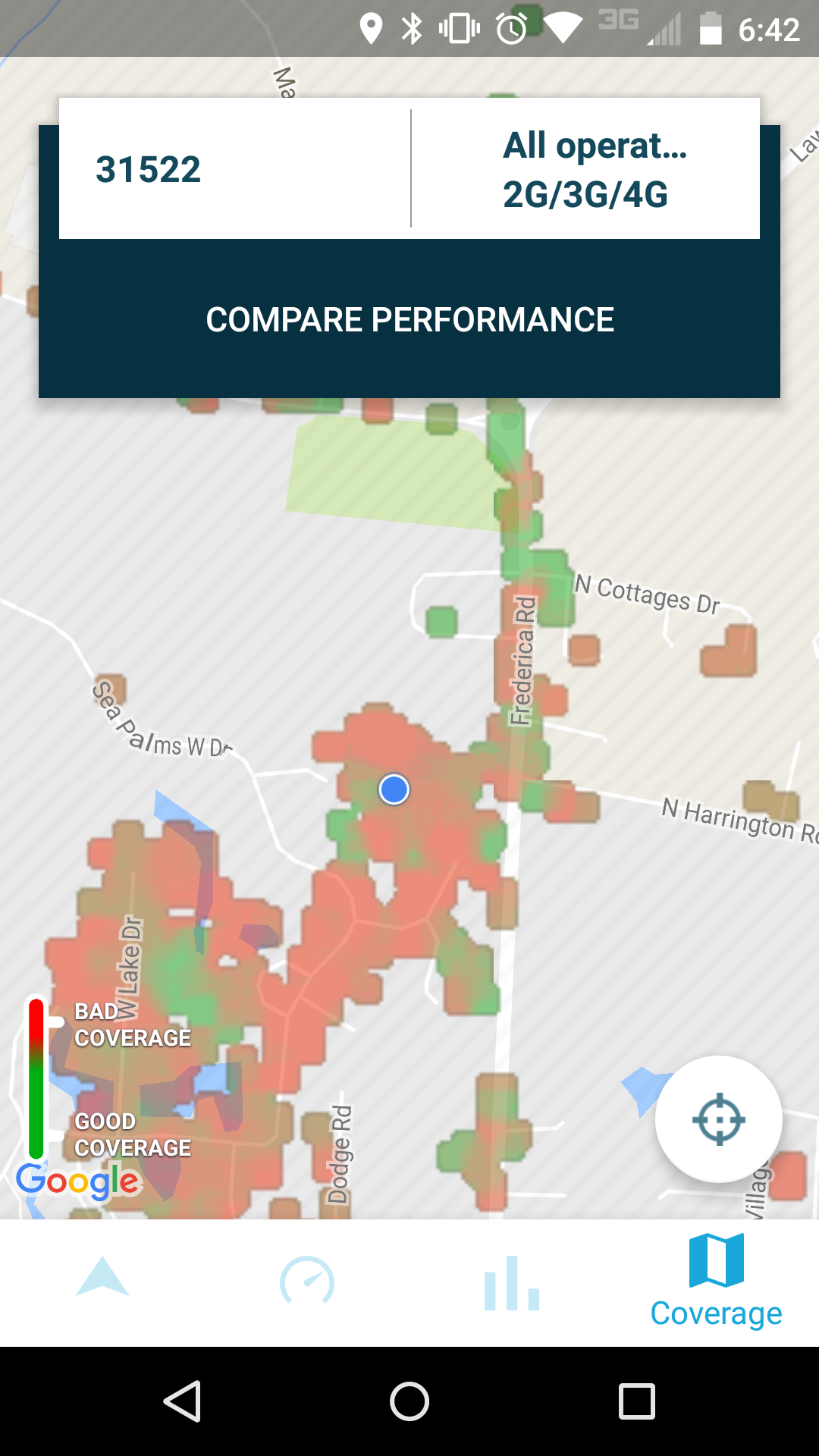 How do you know that those four towers nearby are broadcasting a Verizon Wireless signal? It could be easily be another carrier's towers you can see. The location itself thanks to the local building commission might have restrictions on where and how tall the towers are allowed. The coverage map from Verizon Wireless is not a guarantee of coverage but the theoretical coverage. There is a disclaimer with the map.

As for the real world coverage, another crowd sourcing coverage mapper called Sensorly has similar results from some recent data collected by that application's users. 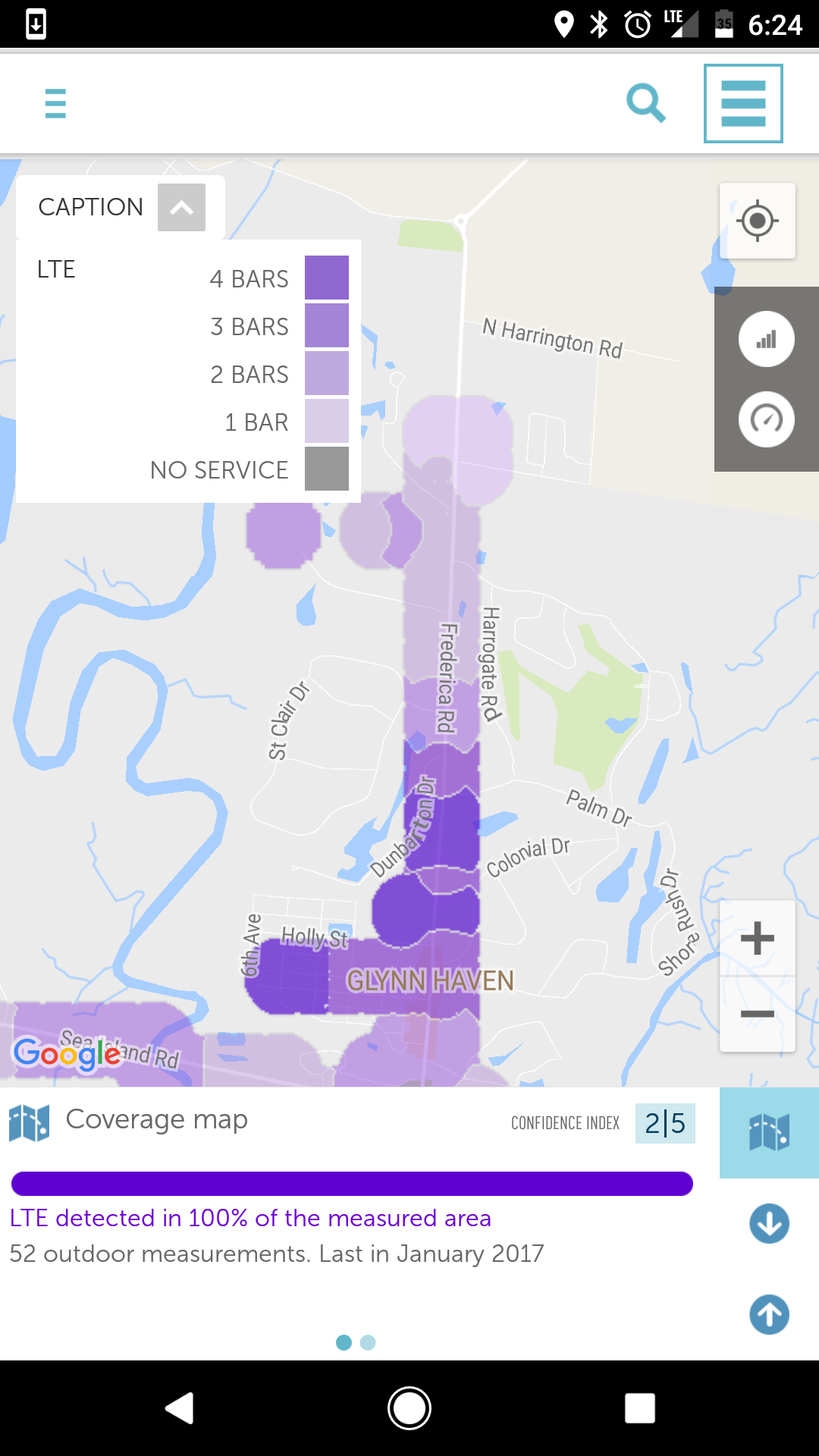 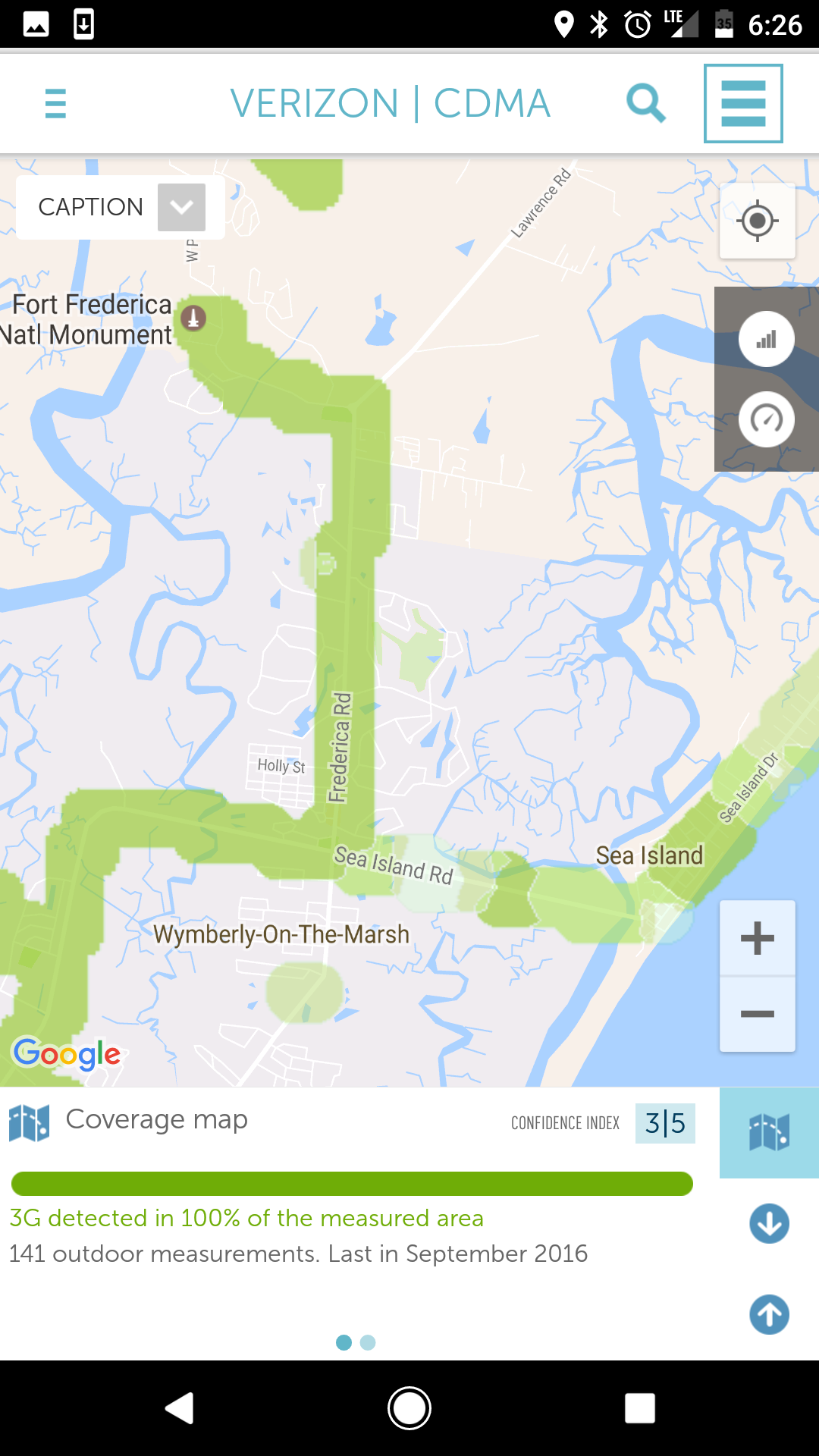 Actually after reviewing the other carriers' data points in the Sensorly app, I suspect that intersection near Harrington and Frederica is equally poor across the carriers.

jimweldy, service issues impacting my my service quality would have me just as concerned. We rely on our service for a large number of functions, so we definitely understand the importance of reliable service. When did these issues first start becoming this way? Does service improve as you leave the area?

Ann154 provided some excellent details as well to help bring further clarity to the issues you are experiencing.

NicandroN_VZW
Follow us on Twitter @VZWSupport
If my response answered your question please click the "Correct Answer" button under my response. This ensures others can benefit from our conversation. Thanks in advance for your help with this!!

The worst signal is when I am holding the phone and sitting in my office.

That's where I would use it the most. The other two are from standing near

with the phone on the railing. This is after you said you had fixed the

problem. So, from my perspective, the problem is not fixed

@jimweldy , our ultimate goal is to provide you the reliable service that you deserve and are here to help.  I want to make sure we take a second look at the ticket we submitted for your area.

Please check your inbox. I will send you a private message to help with account specific information.

Your "actual coverage" image is a bit misleading. That is "reported coverage" from users logged into what I assume is Sensorly or other similar app. It also is misleading in that it is reported coverage normally from people driving in cars and does not include coverage between roads because cars tend to stay on roads and do not drive across people's yards. If they did, more coverage would show up in those images in between "actual coverage" areas along roads.

You should also read the "disclaimer" linked in the Verizon coverage map you listed which states:

International rates for voice and data will apply.

These maps are not a guarantee of coverage and contain areas of no service, and are a general prediction of where rates apply based on our internal data. Wireless service is subject to network and transmission limitations, including cell site unavailability, particularly near boundaries and in remote areas. Customer equipment, weather, topography and other environmental considerations associated with radio technology also affect service and service may vary significantly within buildings. Some information on service outside the Verizon Wireless proprietary network, and we can not vouch for its accuracy."

That isn't Sensorly the OP posted. It might be Open Signal or Rootmetrics. It has been a while since I looked at either of those two applications. I posted the Sensorly screenshot. I also agree with you that those applications often only provide the data from the car traveling along the road. It certainly isn't perfect, but I do appreciate it can be a guide to give the users an idea of what the signal might be.