Mobile solutions
Home solutions
Have a phone you love? Get up to $500 when you bring your phone.
$500 via Verizon e-gift card (sent w/in 8 wks). Activation of 4G LTE/5G phone on 5G Get More plan req’d. Device must remain active for 45 days. $500 charge back if service cancelled w/in 12 mos or eligibility req’s are no longer met. See vzw.com/bring-your-own-device for details.
Help
Sign in
Turn on suggestions
Auto-suggest helps you quickly narrow down your search results by suggesting possible matches as you type.
Showing results for
Search instead for
Did you mean:
More Options
Correct Answer!
Reporting Fraud with Verizon

Thinking of Reporting this Fraud to BBB:

Need Help Please!  I switched to Verizon in November, 2020 and I've had some really bad experiences.  It seems most of this stems from the person I bought everything from on the Verizon Wireless Chat.  Seemed weird to me to buy phones and sign up for Verizon through a chat but that was the Covid-way I guess.

Fast forward to 10/27 - I see another charge for $ 797.61 on my cc statement.  Verizon double-charged me for the iphone 11.  This took a couple of weeks to resolve, several calls, sitting on hold for long long times...

Fast forward to December/January - I notice my bill is higher than I thought it would be.  I start investigating and notice that I'm now being charged monthly payments for the iPhone SE!  So basically Verizon has now tried to double-charge me on BOTH phones.  Spent about 3.5 hours tonight on phone with Verizon, on hold, they forgot about me on hold, had to call and start all over again.  Ended tonight with them saying they were too busy and they're going to call me Monday to resolve this (I really hope they call.... they told me the same thing when I was double-charged for the iPhone 11 and then never called, never received a voice mail or anything).

Oh and one more thing - I was told when I bought everything on the chat on 10/21 that my two rebates for $150/each (in the form of "E-Gift Cards) would be mailed to me in 3-4 weeks.  So that was a total in $300 in rebates I would get for starting 2 new lines with the "Start Unlimited" Plan.  Never saw it in the mail, I've called twice about it and was first told it takes some time, then I was told it would be emailed to me that day.  Never have seen it.  Now they're telling me the Rebate info wasn't put in so I can't get it??  The best thing - I thought it was weird to be signing up for Verizon on a chat and also buying phones over the chat so I screen clipped the majority of the conversation.  I have proof of everything your salesman told me on 10/21!  He messed up up both of the phone purchases and also lied to me about getting the (2) $150 rebates mailed to me in 3-4 weeks.  I have proof of it all - but the Supervisor I talk to on the Verizon customer service says I can't email this info to him.

So MAYBE being charged monthly for a phone I already paid for will move forward on Monday - I really hope they actually call this time.... BUT I've wasted soooo much time on hold calling Verizon, realizing on my own that Verizon has attempted to double-charge me on BOTH phones, I've been lied to by the online chat salesman about the rebates for starting lines which now I'm told is going to be a hard thing to correct.

Basically - I NEED to talk to a regional manager for the Northeast US.  Someone I can send the recorded chat to and who can actually fix all my problems.  Never would I have thought I'd be treated so badly for just switching to their company.  I'm so sorry I switched right now and wish I could go back....  HELP SOMEBODY!!

I have the same question
1 Like
Reply
9 Replies
Correct Answer!
Re: Reporting Fraud with Verizon 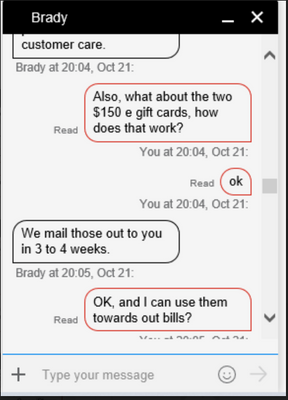 I was told I'd get a call today around noon to sort out the double charge issue on the iPhone SE.  It's almost 1 pm now and haven't received a call yet.... 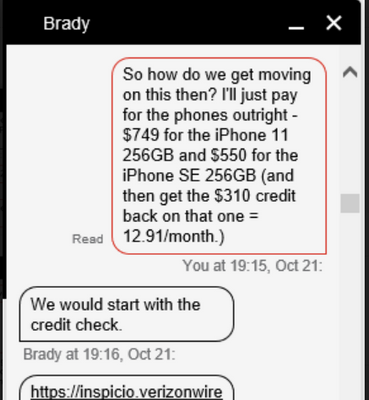 We certainly are sorry to hear you're having so much trouble getting everything set up the way you are supposed to. We want to make sure you have a great experience when starting service and don't regret being with us. We're glad to help figure this out. I sent you a private message. Please reply to that when possible so we can gather additional details and fully assist you.

For those keeping score, it is now 3 pm and never received a call....

I am a consumer myself so I totally get making sure you get a phone call especially regarding a double charge. I would love to review your account to see what options you have. I have sent you a private message so I can help. -Amber

As a valued customer, your concerns are our concerns too and we're here to help you in any way we can. I apologize that you've not received a call back as promised. Verizon realizes how extremely busy many of our customers are and we always value your time. We'd be more than glad to investigate this matter for you, as we'll need to view the notations on your account about the investigation. Verizon takes protecting our customer’s personal and account information very seriously. Since we will need account-specific details from you, we’ve sent you  a Private Message on this topic:

This secure Private Message is a communication between only you and our Social Media team. However, if you don't feel comfortable providing your account information to us here, please reach out to us through any of the other channels found at