Help
Sign in
Turn on suggestions
Auto-suggest helps you quickly narrow down your search results by suggesting possible matches as you type.
Showing results for
Search instead for
Did you mean:
More Options
Correct Answer!
Re: Service went from functional to non-existent

yeah, the one in Settings | About Phone | Network | Network type and strength? 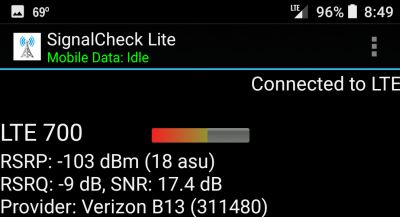 The dBmV signal spread between 3g and LTE is a little different, so over 100 on LTE isn't really that bad. Over 124dBmV is when you start to lose your LTE signal, compared with around 100dBmV on 3G.

The in phone signal status is ok, but I wonder what LTE band you're connecting to. I used signalcheck lite to look into that. When I'm home, I noticed that when my phone connects to AWS, my signal gets poor, 1 bar or no bars. AWS operates at a higher frequency (2100mhz for example), and isn't as good at penetrating buildings. When my phone connects to the tower using band 13 @700mhz, I get 2-3 bars, and my dBmV number goes down in double digit numbers.

What PRL version is your phone using? I had issues on 15518, but everything is much better now on 15535. However, I also installed a new sim card at around the same time as the prl update. I thought PRL's were sent OTA, but I wonder if that information is on the sim too? Or maybe I'm wrong about it being sent over the air?

I mean, it doesn't make sense that it's the sim cards in all the devices. But, that is still something that I would try, it's free and process of elimination.

Don't you mean less than -124 dbm? This dBm signal is represented in negative numbers. A signal of -90 is better than -105 for example.

I used "over" to express a number above 124, higher than 124. . I omitted the - because in this context it's assumed, like the use of ellipsis in the English language, which is extremely common.

mmcvey, Let's dive deeper into your data speed issues. What data plan are you on? What is your current data use on your mobile hotspot? Is this speed slower constantly or does it fluctuate?

Sounds good, our data plan at the time was the 30+GB w/ roll-over and as of a couple months ago it's been dropped to 4GB/month due to our inability to use it at home. We may up the plan to the next tier as some of us are using the data in areas outside the home zip. The hotspot has currently used ~.5GB for the month with 10 days left, but as I said in my previous comments it is only used when attempting to access email and or forms online in short bursts to no avail. All devices (the four phones and the hotspot) are suffering from the same constantly slow speeds at home since roughly last Jan. There are rare instances in the early morning hours (5-7AM) where the service is functional enough to load an email or a couple websites at which point it generally times out or fails.