In-Store or Curbside Pickup: (excludes prepaid)
Same-day delivery:
Sign in
Help
Turn on suggestions
Auto-suggest helps you quickly narrow down your search results by suggesting possible matches as you type.
Showing results for
Search instead for
Did you mean:
More Options
Correct Answer!
Switched to Go Unlimited and now terrible speeds.

Over the weekend I switched for a 16gb share plan to Go Unlimited. We added a fourth line and switched to Unlimited. I was fully aware of the 480p limitations and knowing the speed may be slowed down in congested areas. However, today was our first day at work in downtown Akron near Akron University and both my wife and my speeds were just horrendous. I didn't think downtown Akron (area code 44308) would be a congested area. Here is what my phone benchmarked most of the day:

However, my Ipad on Verizon that has an unlimited data account though my work benchmarked this at the same time: 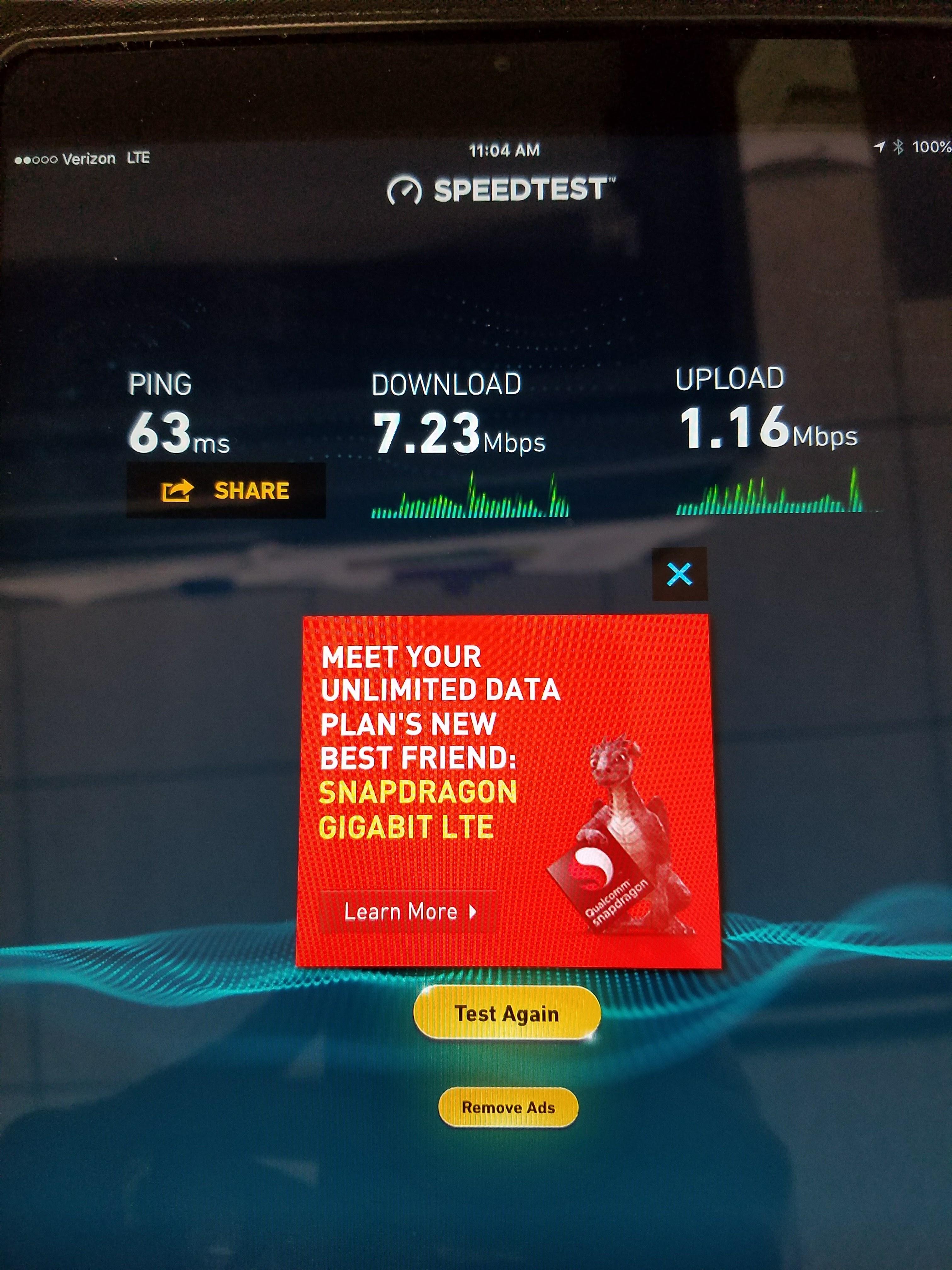 That is a big difference. I realize my plan may throttle and even from my Ipad's benchmark the speeds aren't that great in my area but I never suspected I would be throttled like that. I could barely stream Sirius on my phone and Youtube just buffered.  That totally went against what I have the unlimited data for. I am hoping maybe there was a technical problem in my area today and it will change. I am beyond disappointment if this is not the case.  FYI- 1.5 miles away at lunch I got this benchmark on my phone: 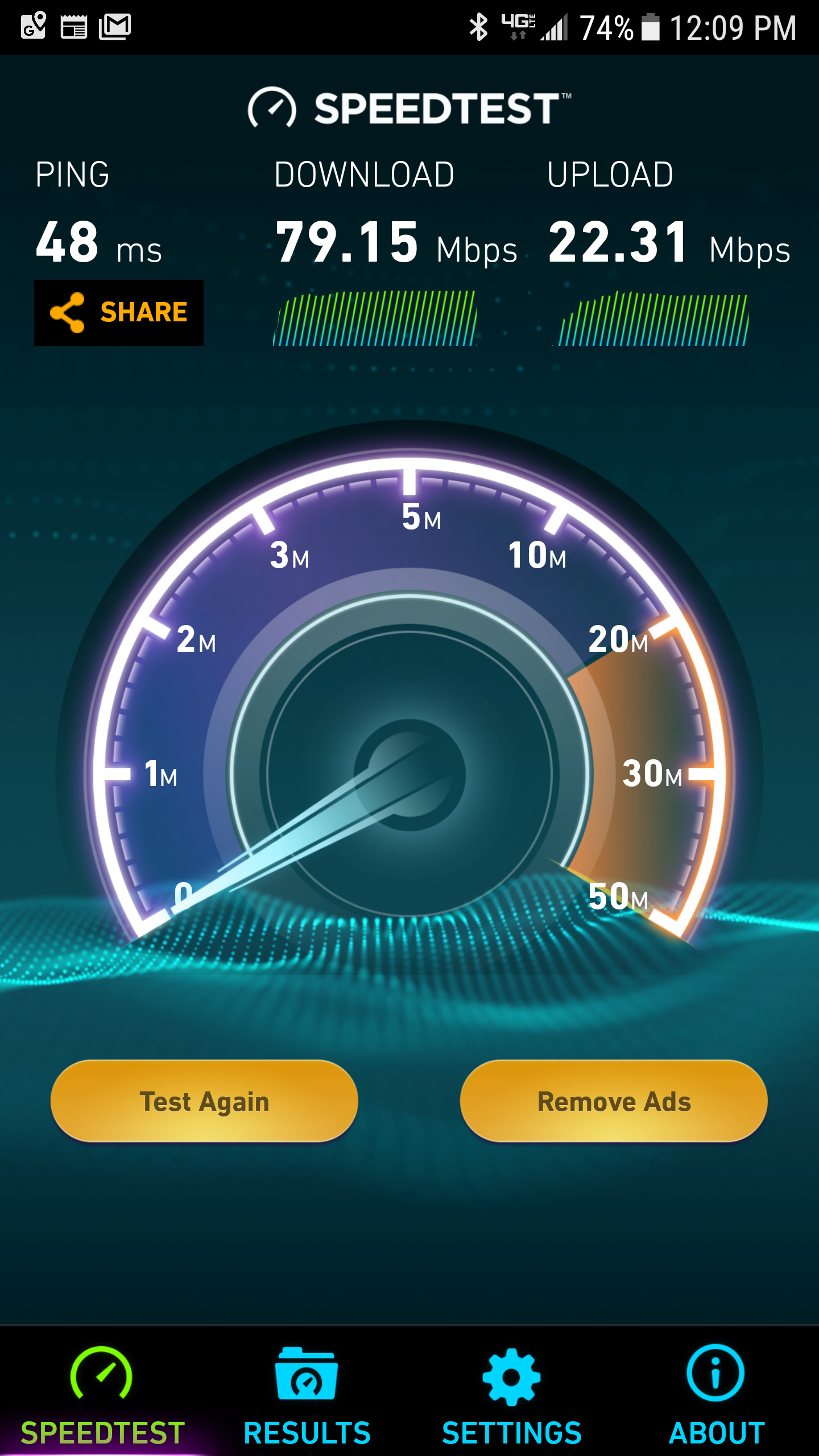 Verizon definitely has issues in downtown Akron. My assumption would be that I would have gotten my Ipad's benchmarks if I stayed on the 16gb share plan instead of switching to Go Unlimited.

I think it's Verizon it's self. My phone has been really slow today and both of ours went to 3g and we weren't any where out of the normal area we are always at.

I hope you're correct and maybe Verizon had a technical issue in my area today.

You could switch to the Beyond Unlimited Plan and see if there is an improvement.

You're in a downtown area near a university and you don't expect a congested network?

I expected it to be somewhat congested. I didn't expect to be throttled from 7.0 to 0.04. My work iPad is on a different Verizon Unlimited plan then my phone which is on Go Unlimited. That is some extreme throttling which basically makes your phone useless.

With the GoUnlimited it only says in congestion you'd be slowed down. It doesn't say to what speeds. You can't compare your iPad on a different plan. It is apples to oranges. If your iPad is on the BeyondUnlimited and hasn't used the 22GB cap then it will work fine. Also, in congested areas you will be naturally slowed by the resource pull on the network. It's like a traffic jam on the highway. Too many cars trying to get through causes slow speeds. The same with data. I like that VZW is trying to compete with the GoUnlimited but we now see how it works. The tower considers itself congested and because you are paying the lower price for the data plan (any data plan), you aren't prioritized. This is the reason I don't switch. I have a tiered plan and don't experience anything but normal slower speeds. Plus, since you switched off of the older tiered plan offerings you might only be allowed to go to the BeyondUnlimited plan.

We have never regretted getting involved with a company more than this one. Our $360 plus bill a month for an unlimited plan that never provides the service promised and keeps shrinking in the 'official' numbers is an absolute joke on MILLIONS of people. Please call customer service so they can tell you a different story every time you call haha. Maybe someone explained your plan to you incorrectly lol! This is a horrible joke on everyone. We are switching and we wont be back. This weekend we will be taking our slow phones that cant even hook up for any decent hot spot or internet access ON THE PHONES THEMSELVES to someone who can handle the job for our money.  This has literally been the worst internet I have experienced. I feel so nostalgic! All I need now is a ring and some little voice telling me 'you got mail' to be full fledged dial up speed! Customer service lies to sell their plans, they shrink them constantly and IF they can get you up and running on any decent speed it is only temporary. THAT is our experience true and honest. NEVER again.  It is not one phone with an issue or old phones..they are all new phones and they all have the same issue: Verizon can not provide the service they are selling. Period. I would love to upload a photo of this box trying to load on their horrible service  just to give you one example but I dont have all day to wait for the pathetic $110 unlimited speed of [Removed].

1 Like
Reply
Correct Answer!
Re: Switched to Go Unlimited and now terrible speeds.

It's now Dec 4th and things have not got worse. I had to switch off the Unlimited Go plan and go back to sharing 24gb to get decent speeds. It worked for a while but now it slows to a crawl at times here in downtown Akron. The consensus is the Verizon cannot handle all the data here because of the traffic from the University of Akron. Just now I benchmarked 1.42 mps download and 0.25 download on Verizon. I picked up a T-mobile sim to try on my old Nexus 5X and T-mobile is benchmarking at 45 mps download and 22 upload at the same time. I most likely will be switching now, very sad to leave Verizon after over a decade with them.

Sorry for the error, I meant to say it's now Dec 4th and things have gotten worse again.