Help
Sign in
Turn on suggestions
Auto-suggest helps you quickly narrow down your search results by suggesting possible matches as you type.
Showing results for
Search instead for
Did you mean:
More Options
Correct Answer!
Unlimited data was a lie

When they switched us to unlimited, (mind you, I didn't ASK for unlimited, it just switched) I was elated!!Finally I thought!!

After years of getting raked over the coals we were finally getting unlimited! We live in a very rural area where home internet is not available. We used the 40-50 gig plans a month and sure paid for it. But now, all was going to better.....so I thought.

March 2nd to April 15th roughly, the plan was wonderful! I still couldn't believe it. Streaming movies, Skype with family etc. Not having to worry about our gigs was incredible.

I was still in disbelief though and kept searching on the website for the "small print". I thought, "why would they do this? They are going to lose out on so much money from people like us". But alas, there was nothing.

So onward and upward. And then, the dark day came. The emails and texts stating we had gone over our 10 gig allowance on our jetpack and were now slowed down to 3g. HUH???

I called and spent hours talking to reps trying to understand what happened. That's when I was told that it is unlimited BUT only 10 gigs on a hot spot and then slows down. BS!!!! They gave me credits, apologized yada yada.

I wanted to switch back to our old, price gouging plan, but they wouldn't let me. OUTRAGEOUS. For 27 days we were stuck with "dial up speeds" if you will. They claimed I couldn't switch back mid cycle.

WHAT??? Mid cycle? I had 27 days of terrible service. I wish I would have taken a picture of their page March 2nd where there was NO small print or ANYTHING stating it slows down after 10 gigs.

THEY realized they were losing out and created the 10 gig story. They straight up lied. So, I wait until my bill cycle starts over and switch back to the 50 gig plan. I would rather be raked over for money than have that slow, snail speed.

NO WAY. Not possible. For 5 years, we had been averaging 2 gigs a day. Now suddenly we are using 6?? Our phones are NOT connected to the jetpack and we shut our computers down at night. We can't even get on the internet long enough to use 2 gigs, let alone 6.

So, unfortunately I had no choice but to switch us back to the unlimited or before we knew it, I would be at 180 gigs for the month (averaging 6 gigs a day @ 30 days=180 gigs). So now we are back on unlimited and the speed is straight dial up. Garbage.

I could barely open this page to type my complaint. WHAT A JOKE. So upsetting and frustrated. VERIZON is rich.

Rich rich rich! Loaded. They are taking people to the cleaners and making hand over fist. It's not right. They should have been forth coming from the beginning about the unlimited and put an asterisk next to it.

And believe me, this 3g speed...yeah right. NOT EVEN CLOSE. Their "3G speed" consists of not being able to surf the internet, watch a video or even open Facebook without waiting 5 minutes for it to load. Hands are tied.

They have us by the you know what! Angry. It literally took me 18 minutes to open this page and post this complaint. UNREAL.

Labels (1)
Labels
I have the same question
1 Like
17 Replies
Correct Answer!
Re: Unlimited data was a lie

I took this screenshot of the plan FAQs on 2/20/2017 when I chose to switch to Unlimited. 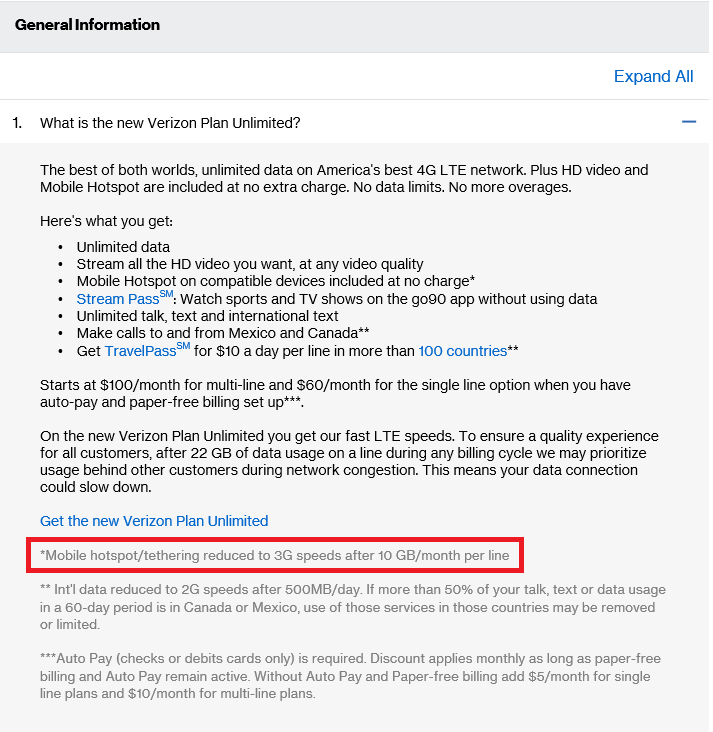 Get unlimited data on the network you deserve: Verizon | About Verizon 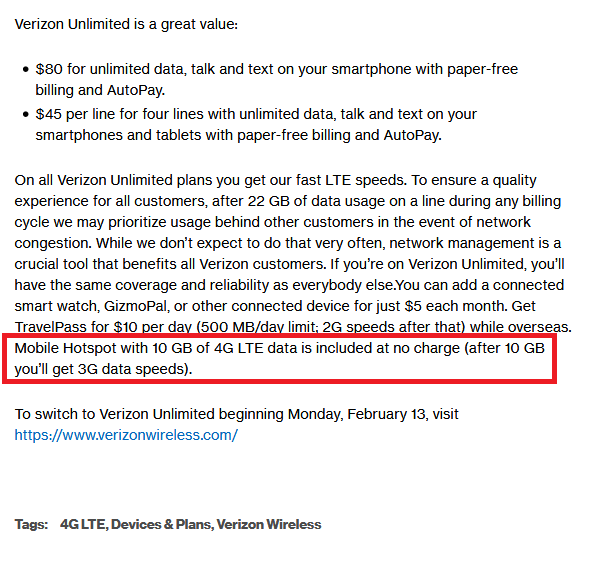 How many lines do you have?  Each line has a 10GB 4G LTE mobile hotspot allotment.  So if you have a jetpack and 4 phones you could still stream 50GB of 4G LTE by using each device's mobile hotspot limit.

2 Likes
Correct Answer!
Re: Unlimited data was a lie

Thank you for your response. Clearly you had the information. I still must say though that at the time, there was nowhere that I saw stating there was a limit. I even called customer service because I couldn't believe it was finally happening i.e.: unlimited. I was assured it was exactly that, Unlimited. Here's the kicker too. The first 6 weeks, IT WAS UNLIMITED. 4G service the whole time, able to surf, play games, stream movies, Skype etc and thrilled that we no longer had to watch our gig usage. It was great!! Then suddenly, 6 weeks later, it stops!! There lies the frustration and feeling like we were lied to. And then making us wait a full bill cycle to have 4G again. That's bad business. As for hot spots, we have the jetpack and 2 phones. The problem with using our phones is that they bounce between 3 & 4G anyway because we are in such a remote location. For some reason, the jetpack has always gotten a better signal, hence using a jetpack for the past 5 years. It's so frustrating and upsetting. Also, on a side note.....when VERIZON switched us to Unlimited and I called to verify that and specifically asked if ANYTHING changed at all, they said no which was untrue. They see we have a jetpack and right then and there told me that it was LIMITED to 10 gigs. On top of that, we were paying $10 a month for usage of the jetpack for the service fee. They raised it to $20 and never mentioned that as well. It's been a nightmare and a bad deal from the start. And now the unexplainable using 6 gigs a day @ 3G  service!?? There is NO WAY. Even when we had the unlimited 4G service for 6 weeks and were watching netflix and movies, we were only averaging 3-4 gigs a day. You can barely get on the internet with the 3G speed. Like I said, it's like dial up. There are no apps running in the background or anything. I'm angry. Our bills every month averaged $350 and they can't do better for their customer.

Dial up is 56 kbps. Anything faster is better than dial up. The 3G speeds according to the VZW reps that roam this community is 600 kbps.

Comparing it to dial-up was a metaphor. But you're right, they're not the same. IT'S WORSE! It just took me 6 minutes to open up my verizon account and respond to you. The 3G speed is NOT as fast as they claim it to be.

A perfect example of how bad the 3G speed is. And yet, or new bill cycle started 9 days ago and it already says we have used 49 gigs. That is IMPOSSIBLE. You can see what our speed is. It had us using 6 gigs a day when we were on the 50 gig plan so I had to with back to unlimited so it didn't have us go over to 180 gigs for the month. And now, it still has us using an average of 5 gigs a day. Something is seriously wrong. UNREAL. Very upsetting.

Not only were we misinformed about unlimited but now the service is out of whack. This is another perfect example. It took me over 20 minutes to post the pictures. But for 6 weeks everything was fine. Unlimited, 4G. we averaged about 2.5 gigs a day. Now we are on 3G, but averaging 6 gigs a day. When it's a nightmare to even try and get on the internet......??? I don't think so.

And one more thing to anyone that thinks I am rambling and didn't read the small print. When I logged onto my account on March 2nd, verizon had switched us over to unlimited automatically. I was in disbelief!! Were my eyes deceiving me?? Could it be real? Unlimited?? My husband and I sat here, scouring the page looking for small print and asterisks. After 4 years of using the jetpack for our home internet (internet providers do not install in our rural area), paying phone and internet bills to verizon ranging $350-400 a month depending on if we used 30 or 40 gigs a month....we were FINALLY going to get a break. I still didn't believe it so, like I said, I called customer service to verify. Yep, unlimited. NO MENTION of a 10 gig throttle back on our jetpack. I specifically remember telling the woman "THANK YOU SO MUCH, YOU JUST MADE MY YEAR'. I was elated. And again, for 6 weeks, we were. Watching DTV on demand, Netflix and Skyping with the family more than once a month. And again, averaging 2.5-3 gigs a day from our normal 2 gigs we used for 4 years. And then, BOOM. They took it all back. And now, have it saying we  are using DOUBLE the gigs. We keep running the test on verizon's page to check our speed. The last 2 tests......one just failed straight up. And the other one....it said to download a 5 gig movie, it will take us 1,151 minutes. YEP.

You and I are in the same boat.  The fact is is that Verizon did not enforce their policy for the first few months.  Very sneaky...  get everyone switched over and have them recommend to friends the awesome service, only to then enforce it.

My BIGGEST peeve about this is this:  I am paying a separate line access fee for my mifi device.  Why is it only getting 10GB a month???

I HAVE NO INTERNET AT THIS ADDRESS.  I NEED SOMETHING DECENT.  2mbps is decent.  300kbps is starvation.