Help
Sign in
Turn on suggestions
Auto-suggest helps you quickly narrow down your search results by suggesting possible matches as you type.
Showing results for
Search instead for
Did you mean:
More Options
Correct Answer!
Re: Verizon Edge - FCC Complaint

Important point you have to send the phone back when you upgrade. So at the 50% requirement you have about $300 invested in it and don't get to keep it. I liked the old 1 year plans paid $300 for newest phone and upgraded every year and kept old phone to do what I wanted to with.

To bad those plans are Gone.. 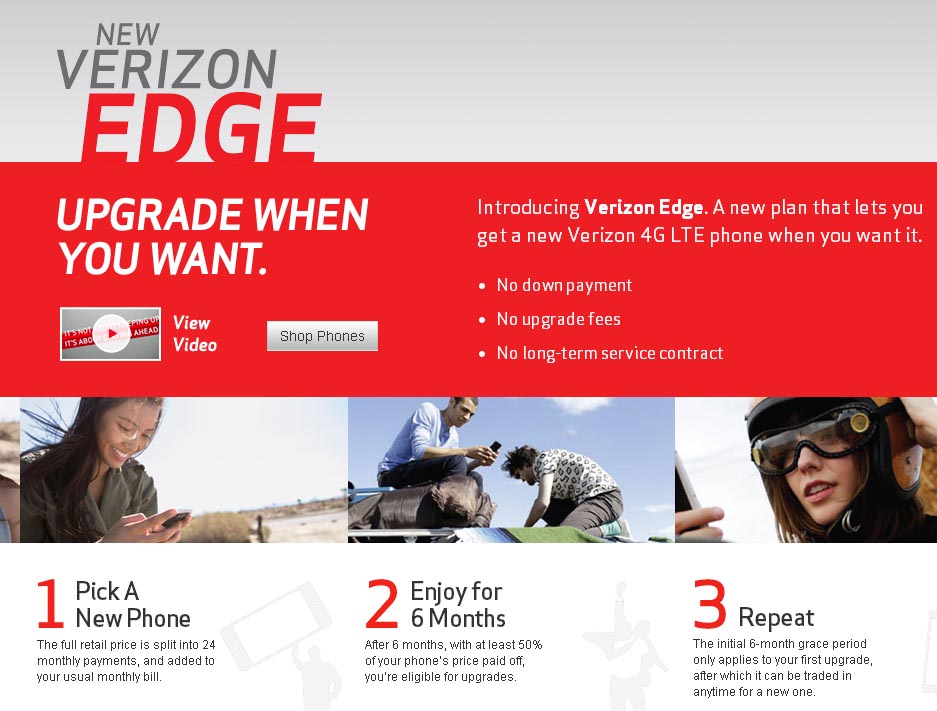 I think I understand the gap in your perspective and mine.

I completely understand about the 6 months and 50% deal, which must be the angle that you are coming from, in which I don't disagree with that statement as it applies to after you are in the program.

Also, The screenshot you posted was only RECENTLY available. The screenshot that I posted is generically what has been advertised for the longest time, without the bottom portion. If you have been following this as I have, then you are aware of this as fact.

The only reason I assumed you were a Verizon Employee was because of the level of defense that you are putting up for the statement of "Upgrade when you want", when it is a completely false statement, which leads to a complaint of false advertising because only recently has Verizon placed this extra information which completely contradicts the Upgrade when you want mantra.

Perhaps we will never agree, but I just don't see the logic behind defending a statement that is blatantly not true. Upgrade when you want is simply a falsehood, as demonstrated by the many requirements for you to actually upgrade.

I agree with you. They are completely misleading. I didn't get into the eligibility details and ended up finding out today that I STILL have to wait for my upgrade date. Screw this program. I'm gonna stick to the old way of upgrading. Also to anyone complaining about this guy filing a complaint with the FCC, shut up. He has a right to and Verizon is false advertising to lure in unsuspecting customers. This is nothing more than a money scheme to lure you in to steal your money. Yes we all know that we don't HAVE to participate, but that's not the point. So stop making that point because it's annoying and has nothing to do with this discussion. It clearly states, "Upgrade when you want" which is a complete and total lie. You have to be eligible for an upgrade, pay off 50% of the phone before another upgrade; which is about 6 months, and be in good standing with your payment history for 6 months. Upgrade when you want should mean upgrade when you want. Idk why they feel the need to be a bunch of criminals. If we end up paying the full retail price in 24 months, i don't see what the problem is. You wanna know why this program is a bunch of crap? Because they want their money now. Plain and simple. I'm alright with the plan and phone i have now, but I still want an upgrade. This Verizon Edge bs won't be getting my money. I'll stick to the original upgrade plan. As I said before, I'm with you on this one Paul. If anything, I'd like to see this program and all the others terminated.

You say you are coming from the perspective of a customer trying to engage the program, yet one of your biggest complaints was something YOU saw in an "advertisement", "Upgrade anytime you want", didn't apply to you, someone who wasn't in the Edge program. Did the advertisement ALSO say it superseded or nullified any requirements or obligations you had with your current plan and/or contract?

You may take my statements as defending Verizon, but the ONLY reason I have been stating an opinion contrary to your own on the development of a program you claim to have been following is because from the VERY FIRST mention of the Verizon Edge program on July 18 by the Verizon CFO in an investor conference call and later confirmed by the Verizon Chief Marketing Officer, it was described as "Available starting August 25th, Verizon Edge spreads the full retail cost of the phone over 24 months in exchange for being able to upgrade your device as soon as 6 months. Just keep in mind that you’ll have to pay off 50 percent of the device to step up to a new one. Those who want to upgrade after a year won’t have any balance to pay."

Maybe, it is just me, but that sounds pretty straightforward.

Finally, it does seem uncharacteristic of Verizon to NOT allow people STILL under contract to participate, though. The Edge program wouldn't have to nullify the contract of anyone currently not eligible for a discounted upgrade due to contract obligations. I don't see why any current contracts couldn't run concurrent with monthly payments on the Edge program. Seeing that the Edge program is basically designed to be an EXPENSIVE rental program, it would seem Verizon would want people entering into the program as soon as possible.

You may be right, perhaps we will never agree, but since I have seen the requirements in order to upgrade in the Edge program from the MOMENT it was first announced, I see no falsehood. Additionally, as the Edge program was introduced because people "WANTED" to upgrade earlier than what was currently available, then the statement "Upgrade When You Want" is exactly what people wanted.

Keep in mind, you can still UPGRADE ANYTIME YOU WANT simply by paying full retail for a phone, so even THAT statement is technically STILL true.

I agree completely with the complaint- their advertising says they let you keep up with the "latest" technology and that's what I want. Their website says "UPGRADE WHEN YOU WANT" and I want to also, but am not allowed because I currently have a 2 year contract. Before EDGE, I could have also upgraded anytime I want by paying full price for a phone, so how is this ANY different. Verizon" Edge" is a farce. Companies always treat worst the customers whose money they already have....and I think I will file a complaint with the FCC also. And you don't have to be "made of money" to want a newer phone. The newest ones have the chip that allows ISIS  mobile wallet and some other RFID advances.

I'm not upgrade eligible for Edge, I haven't even been in my VZW contract for a year

Anybody else get this?

Here is where I am right now... I purchased a Motorola Droid MAXX Thru the Edge Program online. my old phone has no speakers as they are messed up, Instead of warranting the crappy phone with crappy battery I did the Edge. I get the phone on 8/28/2013... Follow the activation directions like many times in the past. Call the number provided and it says all ready and turn phone on and follow prompts... I Get a message sorry we are having trouble activating your phone...after about 6 tries I call Customer Service Tech department. after being on/off hold for over an hour there seems to be an issue in the programming in verizons system(not phone related). Because you have to go to month to month and your unlimited data goes to a set amount it will not allow you to activate the phone. Its been 24 hours and no resolution to this problem. I call back this afternoon and the tech looks into my ticket and finds out this is now a major ticket and HAS BEEN a major ticket since Monday August 26th 2013....So sounds to me like NOBODY is upgrading to the EDGE right now, but they sure as hell are selling phones on the program, and altho I only paid the first payment of 27 bux, I also bought accessories. The tech tells me I can go to the verizon store and either return this phone or get a loaner?... ok, how about activating the phone on my current plan until you figure out how to make the new plan work, sorry sir, we dont know how to do that...UGH!!!!... NO answer to when it will be fixed.... Nice new phone that I cant do a damn thing with cause IT department cant fix the problem... very frustrated!!!!