Help
Sign in
Turn on suggestions
Auto-suggest helps you quickly narrow down your search results by suggesting possible matches as you type.
Showing results for
Search instead for
Did you mean:
More Options
Correct Answer!
Verizon Will Not Honor Promotion

I switched to Verizon via the BYOD promotion. When I signed-up, the fine print of the promotion stated Wavied activation fee applied as bill credit w/in 2-3 cycles. When I received my first bill, $20 was discounted from the activation fee. I called Verizon and the CSR informed me aother $20 credit would be applied on my next bill. However, the next bill arrived and did not include the credit. I called again, and this time the CSR informs me that the promotion was only for $20-off the activation fee of $40. I told the CSR that the terms stated wavied activation fee but he countered that during the day of my sign-up, Verizon was only offering a $20 credit for activation.  How do I go about getting the full activation fee waived, like it is stated on the fine print? 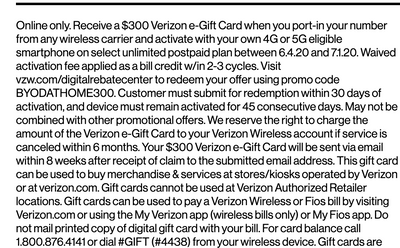