Mobile solutions
Home solutions
Have a phone you love? Get up to $500 when you bring your phone.
$500 via Verizon e-gift card (sent w/in 8 wks). Activation of 4G LTE/5G phone on 5G Get More plan req’d. Device must remain active for 45 days. $500 charge back if service cancelled w/in 12 mos or eligibility req’s are no longer met. See vzw.com/bring-your-own-device for details.
end of navigation menu
Help
Sign in
Turn on suggestions
Auto-suggest helps you quickly narrow down your search results by suggesting possible matches as you type.
Showing results for
Search instead for
Did you mean:
More Options
Correct Answer!
Why does Verizon use FedEx? It made free deliver, not free.

I made this post here because Verizon doesn't have a customer complaint email address, so I could make my complaint with the evidence.

I upgraded my phone via the holiday special. It estimated, that the phone would be delivered Monday, November 28th. This was great because I would be home all day. Well, everything was fine until FedEx refused to deliver on time. They could have delivered the pack on estimated Monday, as the package was in the local distribution office ready to go, but they let it sit for a day, for no reason. Basically, because they don't care that their customer service represents Verizon in this case.

The problem was. I worked the whole rest of the week, and wouldn't be home to accept the package. I called Verizon. They gave me the reasonable answer that if they got involved it would stall the delivery even longer, and to contact FedEx. Which I did.

I told them, the situation, and asked them to leave it at a FedEx depot near me. Which, in short, they said they would.

As I did not want to stall the delivery any longer, I decided to try to make the voyage there, via public transportation. Unfortunately, this would not work and ended up have in spend $94.73 dollars on a taxi to get me there. I am really [Removed] If I didn't go get the package it would have been eventually sent back to Verizon defeating the whole purpose. 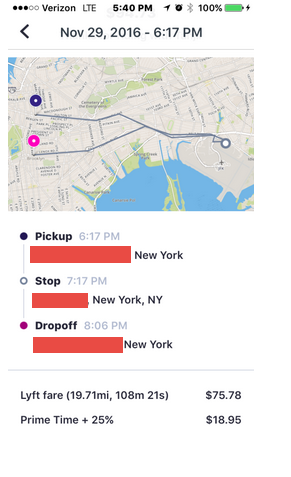 I think Verizon should have to reimburse me the taxi fare, as I have learned this is not an isolated incident for FedEx, and it it is quite common for them to pull these kinds of stunts, not care about both customers in this case; yet Verizon uses them. The funny part is. Verizon does not use them, to get the old phone back.

profanity removed as required by the Verizon Wireless Terms of Service​

Labels (1)
Labels
2 people had this problem.
I have the same question
1 Like
Reply
2 Replies
Correct Answer!
Re: Why does Verizon use FedEx? It made free deliver, not free.

One, it is a two business day delivery. Meaning it would have been delivered on Tuesday no matter what since it was picked up and arrived at the sorting facility on Friday. Two you could have selected they route the package to the nearest FedEx store closest to your work or home after the first delivery attempt instead you going all the way to the main airport distribution center. It would have meant you couldn't pick it up until the next day (Wednesday) since they would need to route the package to the truck servicing that store.

I personally have had similar experiences where I am unable to be home for a package delivery from either FedEx or UPS.  In those cases I have held packages at the nearest service center (a hour drive from my home) or had them routed to the nearest FedEx store (still a 30-45 minute drive from my home). Thankfully I also have reason during the week to be fairly close to the service center due to my work schedule so I can easily drive to the service center and pick up the package over lunch or after work. I don't expect to be reimbursed for the gas and wear and tear on my vehicle. I also try not to make a special trip over the weekend to get those packages either if the service center is open on Saturday as I could have done this past weekend for a package that was being held for me.

0 Likes
Reply
Correct Answer!
Re: Why does Verizon use FedEx? It made free deliver, not free.

Sorry to disagree, but your reply does not apply to personal phones;  Verizon does this--according to FedEx--to prevent fraud.  Verizon should know better; in the New York Metropolitan Area, let the recipient choose the FedEx location. Most New Yorkers do not drive but can get to other FedEx facilities near subway lines.  Let the recipient provide identification along with an invoice for pick-up verification to prevent fraud.