Mobile solutions
Home solutions
Have a phone you love? Get up to $500 when you bring your phone.
$500 via Verizon e-gift card (sent w/in 8 wks). Activation of 4G LTE/5G phone on 5G Get More plan req’d. Device must remain active for 45 days. $500 charge back if service cancelled w/in 12 mos or eligibility req’s are no longer met. See vzw.com/bring-your-own-device for details.
Help
Sign in
Turn on suggestions
Auto-suggest helps you quickly narrow down your search results by suggesting possible matches as you type.
Showing results for
Search instead for
Did you mean:
More Options
Correct Answer!
Why is Verizon Customer Service so inept at dealing with loss of cellular service/tower?

Yesterday, two cell phones (one iphone and one android) in our house suddenly had the following pop up show on their screen: 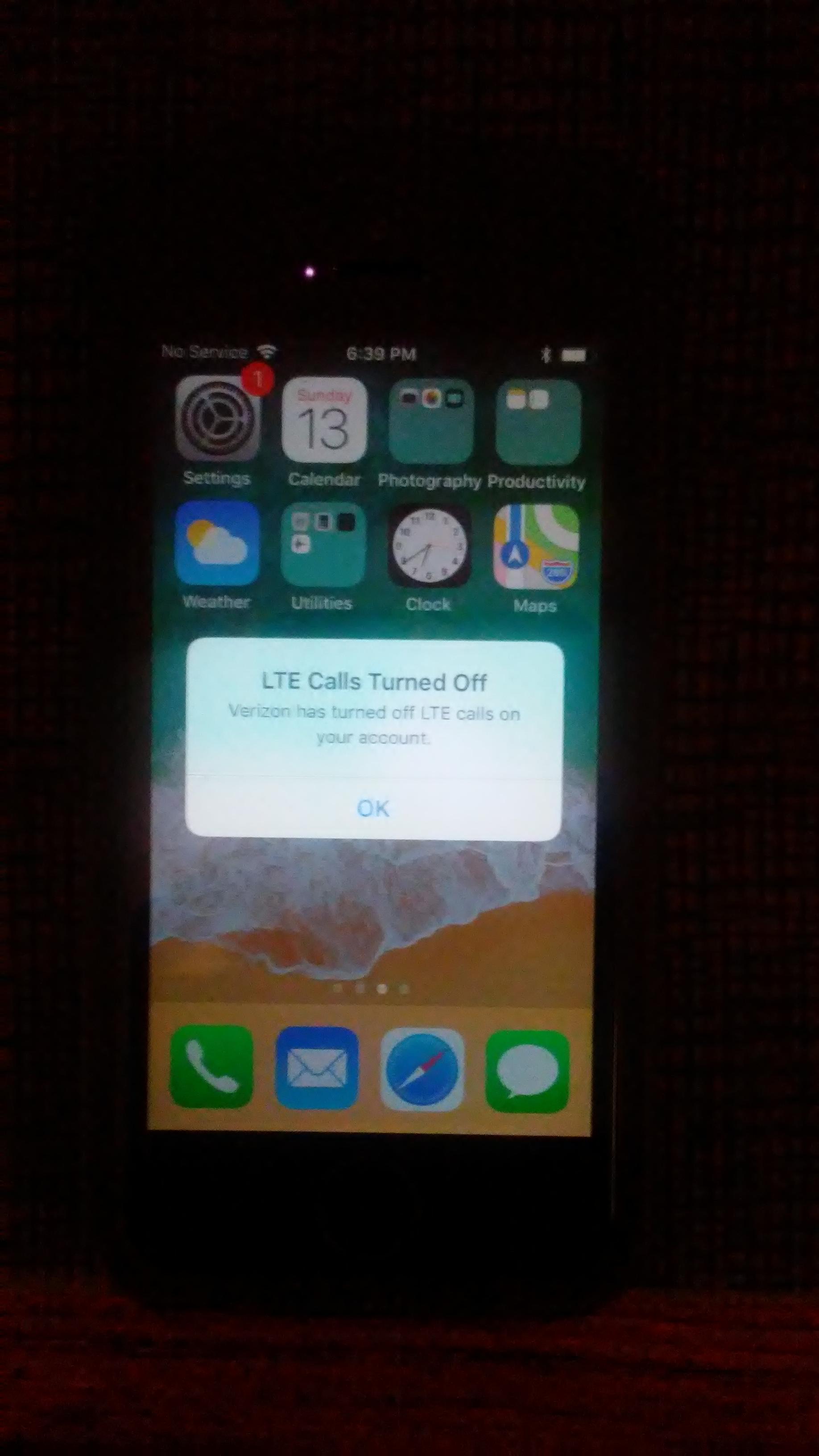 Message states: "Verizon has turned off LTE calls on our account".  And both phones suddenly showed no bars.  Since the message had verbiage in it about our "account", I went on line to my account, but could see nothing wrong.  So I called customer service.  The customer service rep kept saying "Nothing is wrong with your account and we didn't send you that message".  I had to keep telling them that the message wasn't a text message, it was a pop up.  So then they walked me through a bunch of silly and pro-forma phone resets before I begged to be sent to a higher tier support engineer.  The higher tier engineer at least seemed to have an inkling, but didn't seem to have the tools to determine if there was a cellular service outage in my neighborhood.  Ultimately they had to file a ticket, which took almost 20 minutes to put together by asking me a ridiculous number of mundane questions.  All in all, I spent almost two hours on the phone just trying to report a cellular outage to two different CS reps who seemed like that was just the most unlikely thing in the world to EVER happen,and neither of whom knew what to make of the message in the image I just posted.

This is a training problem.  I don't have a problem with cell networks going down occasionally.  Technology sometimes breaks.  But for it to be this hard to report and to have Customer Service (at two different tiers) seemingly just completely confused about what to do?  Get it together Verizon.

Labels (1)
Labels
Tags (2)
2 people had this problem.
I have the same question
0 Likes
Reply
5 Replies
Correct Answer!
Re: Why is Verizon Customer Service so inept at dealing with loss of cellular service/tower?

Because that's not a CS rep job to deal with that. I doubt for a $9 unskilled job that they are versed in technological aspects of the network.

I do not mean CS reps should know how to fix malfunctioning network equipment.  I am expressing frustration that rather than taking a report at face value and passing the caller on to someone who does have the expertise, they will (or in this case did) force the caller through two hours of useless troubleshooting of obviously unrelated processes thereby wasting everyone's time, theirs included.  I also don't appreciate being patronizingly told that I "must be mistaken" about a Verizon pop up on my phone along with "I know we didn't send that message".  They should know what Verizon service pop ups look like.  And know which ones (if any) they are able to help with and which ones they are not.  Hint: if you don't recognize it or understand the language in it, maybe find a colleague who does.

0 Likes
Reply
Correct Answer!
Re: Why is Verizon Customer Service so inept at dealing with loss of cellular service/tower?
seanc_vzw
Verizon Employee

SGOLUX1, we are so sorry to hear about this issue with both phones having that message appear at your home location.  Let’s turn this around.  A private message has been sent so we can assist you further.

Or maybe this has nothing to do with your Verizon account and is iOS related as what deloused linked.

Customer Service isn't going to be able to see your screen. All they could see is if Verizon sent you a text to confirm it's legit. Nothing on the account would look any different because it's your iPhone.

I don't think Verizon offers a training on why to go Android over iOS.