Mobile solutions
Home solutions
Have a phone you love? Get up to $500 when you bring your phone.
$500 via Verizon e-gift card (sent w/in 8 wks). Activation of 4G LTE/5G phone on One Unlimited for iPhone (all lines on account req'd on plan), 5G Do More, 5G Play More or 5G Get More plans req'd. Device must remain active for 45 days. $500 charge back if service cancelled w/in 12 mos or eligibility req's are no longer met. See vzw.com/bring-your-own-device for details.
end of navigation menu
Help
Sign in
Turn on suggestions
Auto-suggest helps you quickly narrow down your search results by suggesting possible matches as you type.
Showing results for
Search instead for
Did you mean:
More Options
Correct Answer!
Worst Possible Customer Service EVER!!!!

I recently got a Samsung Galaxy 10+ in White, I love the phone but about 6 weeks into owning it I dicovered the speaker phone had issues. I did not notice it for that period of time because my viehicle allows my phone to work through the audio system and does not use the speaker phone. I do not use speaker phone generally and only discovered it when I had to use my son's older model truck and in our state you cannot have your phone in your hand while driving(which I think is great). I took it back to the Verizon store it was purchased from, they checked it and said it had an issue and they would replace it...they did not tell me it would be a refurbished phone, nor did they tell me they did not have the White color that I pre-ordered...so I recieved a refurbished Black phone, I called Verizon directly and asked for new White phone since when this process started it had only been 6 weeks...they informed me that they do not send customers a new phone after 30 days, this phone was $1000 so this did not sit well with me...I swallowed my anger and asked them to please at least send me a White one, they said they assured me they would and the next day another phone arrived...it was also Black! At this point my faith in Verizon was faultering greatly....I call again, (mind you I have already spent over an hour on the phone with them over this issue) This time I am informed the other 2 represenatives who helped me messed up and should have told me that I would have to get whatever was available, that I had no choice in color??? $1000 spent on this phone and now I have no choice??? What the heck kind of customer service is that??? At this point I am disgusted, I ask the customer service rep to please speak to a manager about just getting me a new one since they could not provide the phone I had pre-ordered...after several minutes she says she found a way to do it and that it would be sent to me...after all this I breathed a sigh of relief...only to get a call from our accountant saying that they just recieved an email for the purchase of a new phone with some additional charges on it that were not on the original phone! So in essance to get me off the phone the represenative just put a new phone on the account, there was no return information for the bad phone and there were additional charges...none of this was mentioned while I was on the phone with her. This is completely unacceptable and seriously smells like an under handed business practice. Our company has an account with Verizon and we are seriously concidering moving to one of the other providers based on this experience, at this point I would reccomend you avoid them.

Tags (3)
I have the same question
1 Like
Reply
8 Replies
Correct Answer!
Re: Worst Possible Customer Service EVER!!!!

Warranty replacements are always refurbished devices, but there is no guarantee you will get the same color as your original purchase. This applies to warranty claims processed and facilitated by Verizon Wireless.

If you had called the manufacturer directly, you could have been able to send in your white phone for repair and have the same phone returned to you after the repair was completed.

Also what you considered poor customer service was probably correctly handled customer service, but you didn't realize actually how the warranty claims are handled by Verizon Wireless. Your expectations didn't match the reality.

Ann154 - So the fact I was not made aware of any of the issues I encountered until my 3rd phone call and 2 phones later you consider good customer service? The fact that they just tried to charge a new phone to our account with no return of the defective phone without telling me is good customer service? Not once did anyone I spoke to discuss or give me the option of sending it back to Samsung for repair. The fact that a manager is incapable of doing what is right for a customer with an business account that has multiple phones is pathetic customer service. I am not sure what business you are in but if this is your idea of customer service I feel very bad for your customers.

I was addressing only the "color of the phone" complaint part of your post.

Also they aren't my customers as I'm not and never have been an employee of Verizon Wireless. 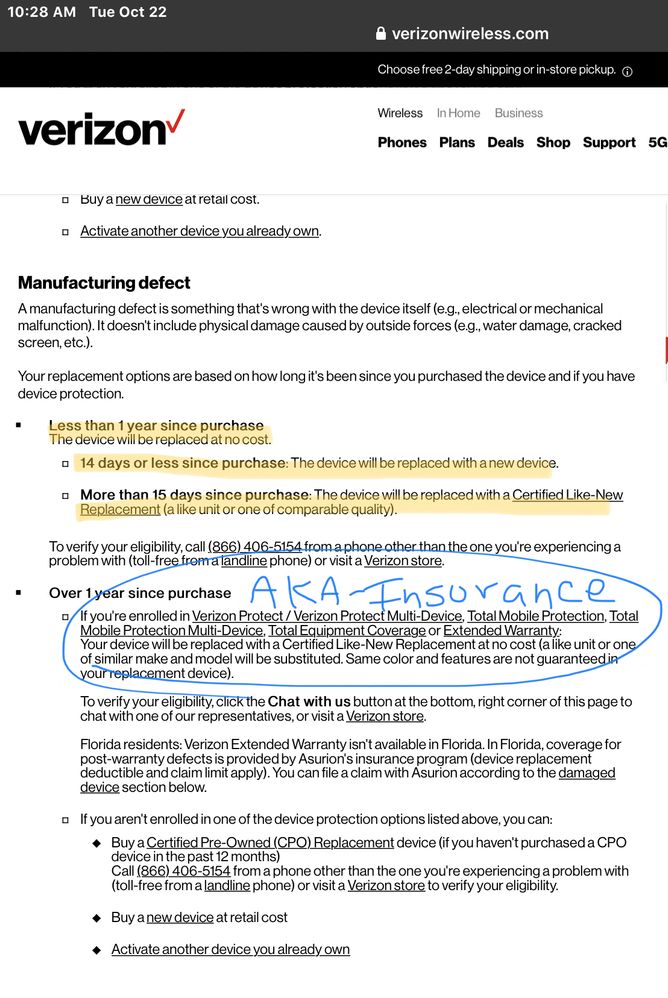 @mama23dogs if we look at the manufacturer defect it says if it was less than 1 year old the device would be replaced at no cost, and that a device will be replaced with a certified like-new replacement. One of comparable quality. And then if we look at the over one year since purchase to which they mentioned the same color and features are not guaranteed.

If this is not the case, I definitely think it should be Rewritten

The definition of the Certified Like New replacement doesn't guarantee the same color would be sent at any time during the warranty period.

Slamskie1, I'm sorry to hear that you've encountered issues with a new phone, and I want to ensure that you have the correct information going forward in regard to our replacement devices. Although the device warranty allows you to receive a replacement device at no additional cost, we are not able to guarantee the color that you will receive: https://www.verizonwireless.com/support/certified-like-new-replacements/ Although you are more than welcome to pursue external avenues for repairing your phone, please note that this may void your manufacturer's warranty. Let us know if this clears things up.