$899.99 (128 GB only) device payment purchase or full retail purchase w/ new or upgrade smartphone line on One Unlimited for iPhone (all lines on account req’d on plan), 5G Do More, 5G Play More or 5G Get More plans req’d. Less $899.99 promo credit applied over 36 mos.; promo credit ends if eligibility req’s are no longer met; 0% APR. Excludes Verizon Prepaid plans.
end of navigation menu
Help
Sign in
Turn on suggestions
Auto-suggest helps you quickly narrow down your search results by suggesting possible matches as you type.
Showing results for
Search instead for
Did you mean:
More Options
***Announcement: Early next week, we’ll be merging the current Fios and Wireless Communities into the all new Verizon Community! Beginning the evening of Sunday 12/4, both Communities will be placed in read-only mode. You’ll still be able to visit the Communities and browse content, but login will be disabled. On the afternoon of Monday 12/5, all users will be able to log into the new Verizon Community. We expect the new Community to be fully functional the morning of Friday 12/9. Additional details can be found in the Announcements board and under Featured Topics!
Correct Answer!
Yet Another Zombie Disney Bundle Add-on

No problem right just use the often referenced instructions to cancel this add-on through the manage add-on page and then add the 'right' one.

Oh, if it were only that easy....   it isn't listed in the add on features but this particular The Disney Bundle (Disney+, Hulu & ESPN+) is actually an ***un-killable zombie add-on*** that neither Verizon or Disney can put down.

I have spent hours every couple weeks over chat and phone calls with no success.  I have been told I have an escalation ticket assigned (number withheld from this post but I have it) and should have had an update after 2 weeks (that was a month ago).

I am able to go into the offending add-on and am amble to 'cancel it' through the web interface - well it says it does and confirms it saying give the system 15 minutes to have it reflected in the web / account page - but it never actually goes away.  I have 'Canceled' it only more than a dozen times since November.   I can't add the right one while the old bundle is on the account...

A couple time Verizon referred me to Disney to address saying they can't cancel it for me because it is a 3rd party billed item - never mind the fact that Verizon added the add-on.  Disney support has confirmed multiple times that I do not have a third party  billed account or anything other than what Verizon manages.

I am about to be billed again for an add-on that should be included in my plan, that I specifically worked with Verizon to add correctly 2 months ago to avoid these exact problems!

So *** approach with caution *** anyone moving from a start unlimited plan to the unlimited plans that include the bundle... you may find you will actually be paying for that free services for months while they 'investigate'...  (though to be fair if * after you are billed and pay the overcharge * you can spend an hour over chat to re-explain the problem each and every month and * ask * for a bill credit for the following month, because that is what qualifies as customer service these days???)

I have the same question
0 Likes
9 Replies
Correct Answer!
Re: Yet Another Zombie Disney Bundle Add-on

"Please note, the link we provide has a timed expiration, so we encourage you to continue as soon as possible.

Authenticate and continue here:"  then nothing else...

What a strange experience this community forum is... 20 minutes after the last I got an additional PM from Verizon support this time with an authentication link.  I clicked on it within a couple minutes of it being sent which immediately redirected me to an error page:

I an only assume because I had a previous Verizon account window open that might have timed out, so I tried opening the link in a new incognito window that took me to Verizon Wireless to login again.  On successful login it took me to an embedded chat window for the Verizon Social Media team where it has sat idle for going on 30 minutes now (after replying with the requested information)  Not a very promising start: 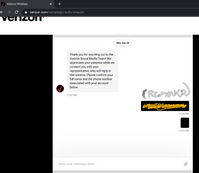 That's not the kind of experience we want you to have when working with us, jeffnhl1. Are you still having trouble with Disney+? We would be happy to help!

Yes, no change, it is still an issue - even after waiting an hour on the last support chat, it just showed up on my bill again.  I was promised a resolution in 48 hours, that was 3 days ago and counting, no luck.

For anyone tracking the progress on this thread, a couple days later I got a couple private messages from vzw_customer_support, they shared that if you are moving from one bundle or add-on that included Disney+ you need to cancel that and wait 24 hours before adding the new one.  Apparently this was not well known even a month ago (and I simply followed the directions Verizon support gave me at the time).

That being said they also promised I should see some action on the open escalation ticket (that has been in the system since 11/29/20) in 5 days... that was about 10 days ago and still nothing.

I still have the wrong premium add-on  on my account, I am still being misbilled, and I (and Verizon) seem to have no way to correct my account.

So another 2 weeks have passed and another bill came out with the billing error still active.  Except when I called in this time to get an update and start the latest bill credit "request" I was told my previous escalation ticket was closed out on Jan. 13 with a note asking if the issue was with the myVerizon App or the website - no notice given to me as I was promised, no discussion, or any way for me to answer the question (or even know it was asked).  Troubleshooting had been tried using both the app and the website, neither lets the plan add-on be adjusted (which was in the notes already).

So another escalation ticket was opened and I was told another 3-5 days....  I'm not optimistic.  I have already added a calendar reminder to follow up in another 2 weeks.

Our Disney+ Bundle offer is the best, and we want you and your family to enjoy it. I'm genuinely sorry for the experience you're having with us. Let's turn this around, and please tell me more about what's going on? I assure you we will do all the research necessary to get this resolved for you.

Thanks for reaching out.  The long version of what is going on is at the top of this thread, the issue remains unchanged despite hours of calls and chats as well as escalation tickets with Verizon and Disney.

The short summary is:

- In November with the help of a Verizon support agent I upgraded one of my lines from start unlimited to play more unlimited to allow the full Disney bundle instead of just Disney plus.

Any help would be appreciated.

We'll be happy to have a look at this for you, jeffnhl1. Please look for our private note.