Mobile solutions
Home solutions
Have a phone you love? Get up to $500 when you bring your phone.
$500 via Verizon e-gift card (sent w/in 8 wks). Activation of 4G LTE/5G phone on 5G Get More plan req’d. Device must remain active for 45 days. $500 charge back if service cancelled w/in 12 mos or eligibility req’s are no longer met. See vzw.com/bring-your-own-device for details.
end of navigation menu
Help
Sign in
Turn on suggestions
Auto-suggest helps you quickly narrow down your search results by suggesting possible matches as you type.
Showing results for
Search instead for
Did you mean:
More Options
Correct Answer!
spamming and cramming

I recently discovered that I have been charged $19.99 for Unlimited Cloud on 7 lines since January 2021.  We did not authorize the addition.   Verizon indicates that these charges were initiated by us when we were communicating the deleting of a line for an elderly family member that could no longer use the cell phone.

1) Saturday 7/23/2022 -  was on and off the phone and chat for most of the day explaining and re-explaining the situation that I had discovered.   Was told that the account had been noted in detail and escalated and that I would receive a response in 4-5 business days but there should be no problem crediting the account and that the service had been cancelled.    Was told that the problem was a "billing error"

2)Sunday 7/31/2022 -  looked online and saw that the support ticket had been "cancelled" - no other explanation or attempt to communicate.   Ultimately spent around 4 hours on chat.   Was told late in the chat that we had authorized the addition of the charges.   Verizon was not able/willing to tell me or show me where and how we authorized the expense.   Was told that I had received notifications that a change had been made which equated to authorization.

apparently 1 month had been credited on 7/23 and the first agent I spoke to on 7/31 had processed an additional months credit ($159 / month for the 7 lines).

the second agent that i reached via social media eventually offered me 2 more months.   I explained to him that these were unauthorized charges and this was not a negotiation.   He proceeded to tell me that Verizon had my authorization but could not show/explain.   We came to an impasse and ended the chat around 10pm - that had started around 6pm.

How do I escalate further - the Verizon Contact Center must have terrible tools because I am required to mostly tell the entire story each time I get a different agent and it doesnt appear that the previous chats are available - or the agents dont take the time to review.   I have been told repeatedly that my account was noted - but there is little evidence that its true or that the agents bother with the details.

For me a simple conversation - You overcharged me! - I haven't utilized the service - Some of the lines we pay for do not even have devices assigned - I have been a customer for over 30years since before Verizon bought my orignal carrier.

I have the same question
1 Like
Reply
8 Replies
Correct Answer!
Re: spamming and cramming

Sorry - I mistyped above - the charges started in January 2022

Genesis with VZW Customer Support - you sent me a private message but its not obvious how to reply - please let me know how best to reply to your inquiry. 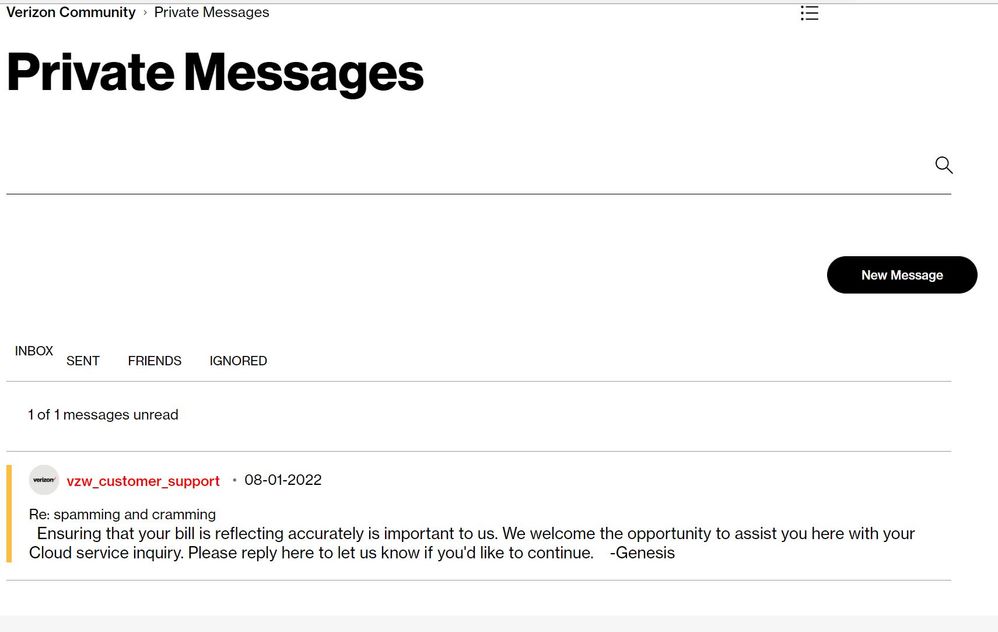 You have to click on the SUBJECT line, e.g. the Re: spamming and cramming line which should be a link to open the actual message.  What you are showing is only the 'preview' of the message and not the message itself.

...Just another VZW customer...trying to offer some assistance...
0 Likes
Reply
Correct Answer!
Re: spamming and cramming

Good morning. I sent another Private Message. Please let me know if you are able to respond. -Vanessa

SugarBear1132, we have responded via Private Note. If you are having trouble on this platform, please view the link below for communication options.

SugarBear1132, I'm sorry if there has been confusions surrounding the bill you've had. We always want you to be able to contact us when you see something isn't correct on your bill. I'm sending you a Private Note where you'll be able to reply to us there, so we can provide assistance. -Alicia