Mobile solutions
Home solutions
Have a phone you love? Get up to $500 when you bring your phone.
$500 via Verizon e-gift card (sent w/in 8 wks). Activation of 4G LTE/5G phone on 5G Get More plan req’d. Device must remain active for 45 days. $500 charge back if service cancelled w/in 12 mos or eligibility req’s are no longer met. See vzw.com/bring-your-own-device for details.
Help
Sign in
Turn on suggestions
Auto-suggest helps you quickly narrow down your search results by suggesting possible matches as you type.
Showing results for
Search instead for
Did you mean:
More Options
Correct Answer!
Need clarification on SGSIII preorder and forced share plans

I've read both, and gotten both answers from Verizon. I need a rep to put it in writing here.

If I pre-order the Samsung Galaxy SIII now, but it isn't shipped until after June 28th, will I be forced onto the awful Family Share Data Plans when I activate? 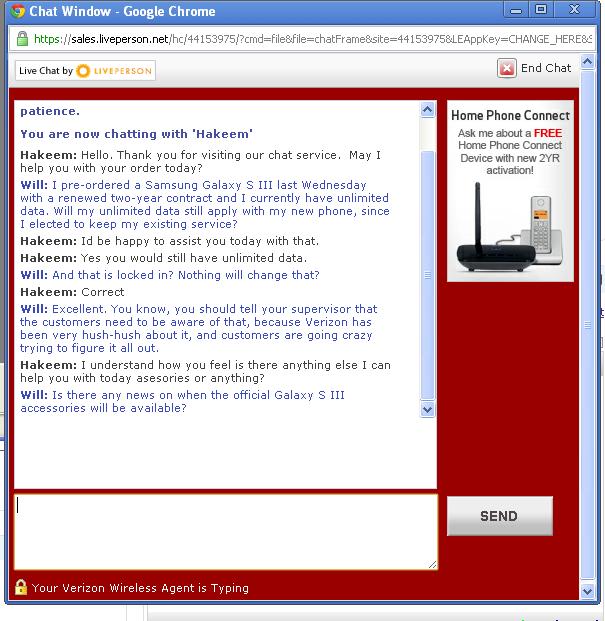 In writing, from a rep.

Thanks for that! The issue is, I've had one rep tell me I'll keep my unlimited data, and another tell me that if I activate the phone after June 28th, I'll be forced onto the share plans.

I emailed Verizon Customer Service, asking exactly this question, and the response I got was a comparison of the old plans versus the new plans (slanting toward the new ones, of course), and really didn't even address the question. I re-emailed them again, asking for a simple yes or no answer without any other information about the plans. I'm still waiting for that reply.

I've had constant problems with Verizon answering questions. I have a great promo plan, and last time I upgraded my wife and daughter's phones I asked a phone rep if upgrading would cancel the promo, and was assured it wouldn't. Two days after I activated the new phones, I checked my account and the promo was gone. I called, and this rep informed me the previous one was wrong (but strongly inferred that I'd misunderstood him), and told me there was no way to put the promo back on as the system would absolutely not allow it. I hung up, called again five minutes later, and this rep put me on hold for two minutes, then informed me the promo was back on my account.

This is why I want it in writing from someone official at Verizon. I don't want any surprises in early July when I activate.

When you preorder your GSIII at Verizon, they lock in your unlimited data plan during the transaction. It has  been confirmed a few times on various sites stating that you can still keep your unlimited plan even though you wont receive the phone till after the 28th. Preordering at Best Buy is a different story because  they only have you put down $50 deposit to reserve the phone itself and nothing is done with the plan until you receive the phone.

The Verizon Wireless CTO is on the record as saying that SGS3 pre-orders made by June 27th at the latest will be grandfathered in for unlimited wireless. Any pre-orders made after that at a subsidized price will be subject to the switch-over. I believe Droid-Life.com or BGR.com reported on this a week or so ago.