Mobile solutions
Home solutions
Have a phone you love? Get up to $500 when you bring your phone.
$500 via Verizon e-gift card (sent w/in 8 wks). Activation of 4G LTE/5G phone on One Unlimited for iPhone (all lines on account req'd on plan), 5G Do More, 5G Play More or 5G Get More plans req'd. Device must remain active for 45 days. $500 charge back if service cancelled w/in 12 mos or eligibility req's are no longer met. See vzw.com/bring-your-own-device for details.
end of navigation menu
Help
Sign in
Turn on suggestions
Auto-suggest helps you quickly narrow down your search results by suggesting possible matches as you type.
Showing results for
Search instead for
Did you mean:
More Options
Correct Answer! Jump to solution.
Windows 10 upgrade

So Microsoft has finally after months and months released Windows 10 update for mobile devices with a caveat that it is up to the carriers to push it out to their customers.

So what I would like to know is when will Verizon push out the update to my phone which I know is fully capable of handling the upgrade?

I know that when Microsoft release 8.1 Verizon never pushed out the update (for some unknown reason) as I was forced to upgrade to 8.1 via Microsoft Developers app, and 8.1 ran perfectly fine on my then old HTC M8, I now have the Lumia 735 which I specifically purchased with the knowledge that it would get the update to Windows 10 (mobile).

So when is Verizon going to send the new update to our devices?

Do not be jerks by not releasing it to your customers!

You'll have to wait to see if and when VZW will release the update for the 735.  There will be no response here as to if or when.

If the device isn't listed here, Supported phones for Windows Insider Preview - Microsoft Windows then it's not a Verizon issue but a Microsoft one.  Like the Icon isn't on that list so we're [removal required by the Verizon Wireless Terms of Service] for now.

True I don't see the Lumia Icon listed but the 735 which is what I have is listed.

You'll have to wait to see if and when VZW will release the update for the 735.  There will be no response here as to if or when.

If you have the Lumia 735 you need to install the "Upgrade Advisor" app from the app store. This app will upgrade your device to Windows 10.  No carrier is pushing this windows 10 out OTA in the USA.. every one has to install that Upgrade Advisor app. It clearly says that on the Microsoft page.

Which I have installed on my phone, but seems odd that it would say that it isn't sure that my phone is supported when their web-site says otherwise. 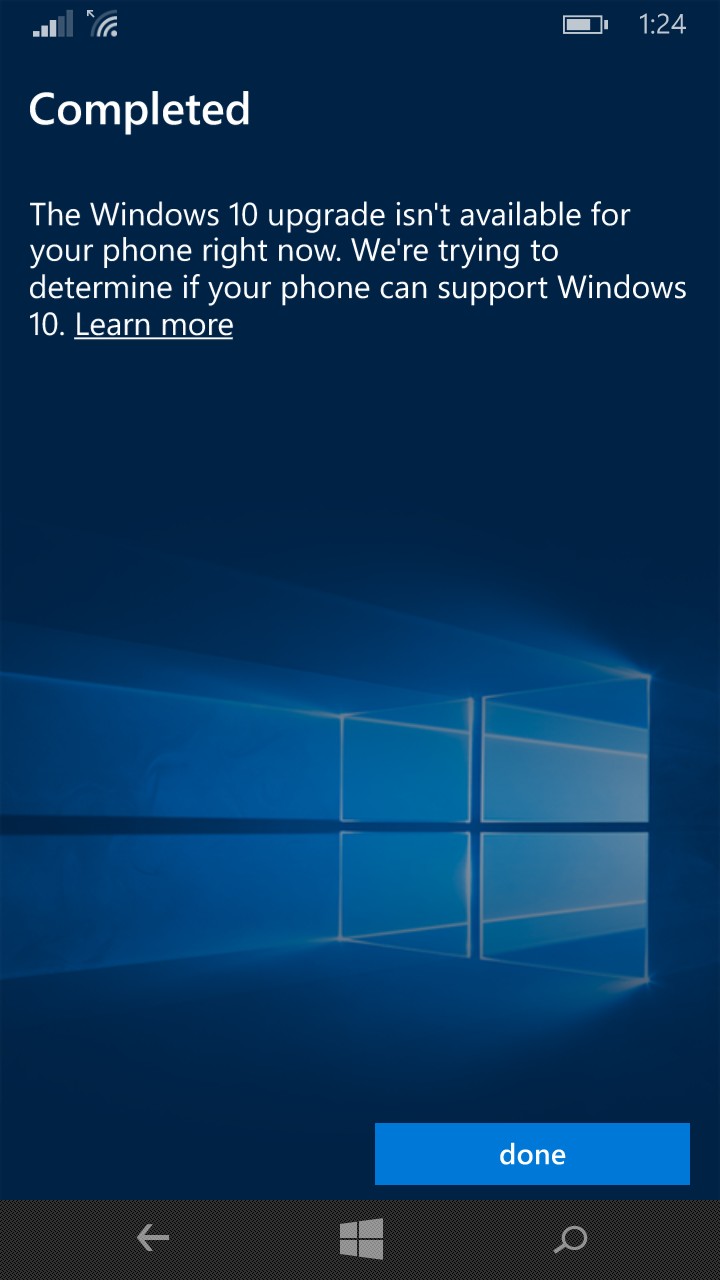 Keep trying.  Microsoft is rolling this out now.  I am really not sure if Verizon has to give their blessings or not.  Unlike the Icon, 928, and 822, the 735 is not limited to just Verizon.  Let's hope it gets pushed soon.  Would like to know when it does.  I may switch from the 928 to the 735, as it looks like the end of the road for anything other than the 735.

1 Like
Reply
Correct Answer! Jump to solution.
Re: Windows 10 upgrade

I rolled back to 8.1 last night and like you downloaded upgrade advisor. It got the same message! it's got to be Verizon. MS said only unlocked phones and Verizon tells me my phone is unlocked!

same on my 735.  What gives?  Is Verizon holding this up?  I may just join the insider program and get it that way.

Very ready to say goodbye to windows phones if I have to go through more waiting.

this is where it will be listed if and when they upgrade to win 10.