Mobile solutions
Home solutions
Have a phone you love? Get up to $500 when you bring your phone.
$500 via Verizon e-gift card (sent w/in 8 wks). Activation of 4G LTE/5G phone on 5G Get More plan req’d. Device must remain active for 45 days. $500 charge back if service cancelled w/in 12 mos or eligibility req’s are no longer met. See vzw.com/bring-your-own-device for details.
Help
Sign in
Turn on suggestions
Auto-suggest helps you quickly narrow down your search results by suggesting possible matches as you type.
Showing results for
Search instead for
Did you mean:
More Options
Correct Answer!
Windows Phone 8.1 GDR 1 Option
MadDogFL62
Novice

If you are tired of waiting for 8.1 Cyan to release and have a little bit of "tech" in you, time spent with the Windows Phone Developer Preview Program may be an option.  Be warned that Developer Previews are not supported by Verizon and that the version you get from Microsoft is a beta version of the OS.  I have had ~6 DP updates loaded to a test phone that I own and all were clean updates - just like you would get from a carrier.  And the Verizon driver update for my phone that released a week ago loaded without conflict.  The quality of the updates has been very good too, including the most recent 8.1 GDR 1.

So how do you play?  Simply review the Websites below which explains the program, what you can expect, and how to enroll.  Yea, man - you can be a Microsoft Geek with a smokin' Windows Phone in about 30 minutes.

Just think.  All of the features you have been reading about for weeks now can be on your phone.  If you want, play with the Preview now and load Verizon's release "whenever" (I think that is the most recent confirmed release date).  And 8.1 GDR 1 includes the most recent Live Tile Folder update and new Xbox Music (something that Verizon WILL NOT be sending you).  I am sure that the conservative naysayers are going to come out of the woodwork, but there's really no more to it than running a preview beta on a laptop or PC.  Actually, I have read that there is more support with the Windows Phone DP beta as Microsoft is very anxious to get your feedback about bugs or defects.  Just pay attention to the advice given on the Developer Website regarding backups, restores, etc.

Seeing is believing.  Below are samples of the new folder options.  See the image on the right and how some of the tiles are "empty", but that under those empty tiles is a gray heading of "Games", with a bunch of game tiles listed?  Well, that's how folders work.  Touch the tile called Games that has all of your game icons on it and it opens the folder below the Live Tile.  Touch the tile again and it closes the folder.  The Live Folder Tiles are just that too, in that they display the different apps or games that the folder contains by changing them in size, shuffling them, etc.  Some pretty cool stuff for a "dot" release. 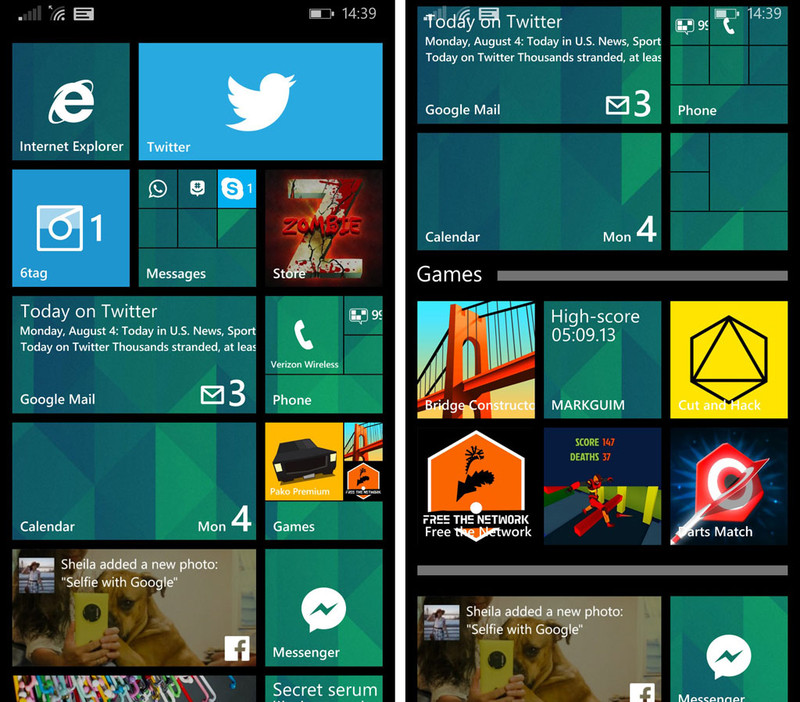 If you are tired of waiting for your 8.1 Cyan update and if you think that the US Government is going to storm your house with at SWAT team and take away your birthday for filing a complaint with the FCC (www.fcc.gov/complaints), then maybe the Windows Phone Developer Program is for you?  Life is full of options!  Below are some additional stories that I found informative.  Oh, and good luck!

If you were having problems getting at the 8.1 GDR 1 update, please read...

Just got a GDR1 update 8/19/14.  Thought it was the Cyan update, but the GDR1 update was a pleasant surprise nevertheless.  It tightened up a few loose bugs, improved battery life, and corrected some download issues that a random few were having.

Not a bad option if you are TIRED OF WAITING for 8.1 Cyan.