Mobile solutions
Home solutions
Have a phone you love? Get up to $500 when you bring your phone.
$500 via Verizon e-gift card (sent w/in 8 wks). Activation of 4G LTE/5G phone on One Unlimited for iPhone (all lines on account req'd on plan), 5G Do More, 5G Play More or 5G Get More plans req'd. Device must remain active for 45 days. $500 charge back if service cancelled w/in 12 mos or eligibility req's are no longer met. See vzw.com/bring-your-own-device for details.
end of navigation menu
Help
Sign in
Turn on suggestions
Auto-suggest helps you quickly narrow down your search results by suggesting possible matches as you type.
Showing results for
Search instead for
Did you mean:
More Options
Correct Answer!
Text from Verizon with a followup from Verizon Fraud Department

I had received a text on 2/29/2020 that there was a request to access my account at a Verizon Store. Obviously, I was not at a Verizon Store. I immediately contacted Verizon via chat which resulted in me contacting the fraud department via a phone number they had supplied. After my chat I had requested the thread of the chat to be emailed to my email address. (I never received it).

The Fraud department said that they had no records of ANY texts being sent to my phone which was not true. I get texts all of the time from Verizon for payments, etc. On the same day, I received an email supposedly from the Fraud department. After looking at the copyright date compared to my other emails from Verizon, something looks wrong. All of Verizon's copyrights are dated 2020 except for this one from their fraud department which is dated 2019.

My phone accounts have been hacked over and over again and I have a suspicion of who it is unfortunately, he is family - all of my online accounts have been hacked repeatedly since 2013 after I gave a family member.  The authorities will not assist. To this day my accounts are still being hacked and I need some assistance here as to the validity of this email. Is this a forged email??? I have the original translation. In the past I have received weird embedded messages from unknowns referring to Scrooge back in November/December 2017. 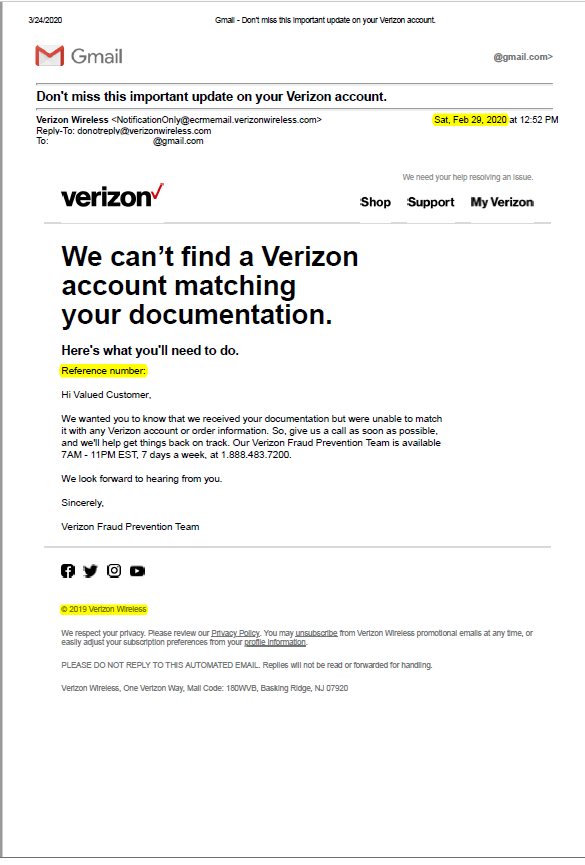 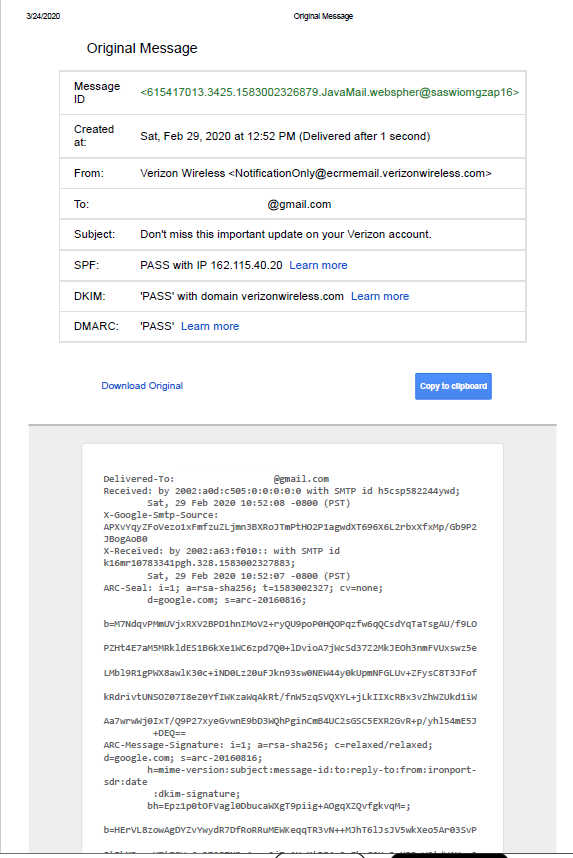