Help
Sign in
Turn on suggestions
Auto-suggest helps you quickly narrow down your search results by suggesting possible matches as you type.
Showing results for
Search instead for
Did you mean:
More Options
Correct Answer!
Order issue BOGO

I upgraded my phone 2 weeks ago with trade in and promo.    This morning ordered new iphone 13  and add a line. System display phone is free, I will get 800 promo.  That is because I got iphone 13 two weeks ago.  Yes it was a good deal I ordered.  I have the order confirmation with promo.  I check NextBill later and I did not see the promo. I called verizon  talked to 3 agent and they told me I do not get the promo. There is a mistake on the online system.  This is not acceptable from customer perspective.  I assume there was a promo based on why system display and order then I found out there is no promo. 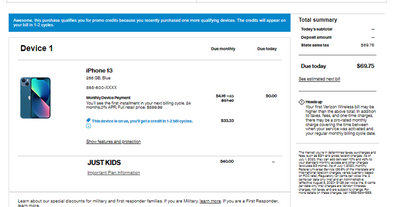 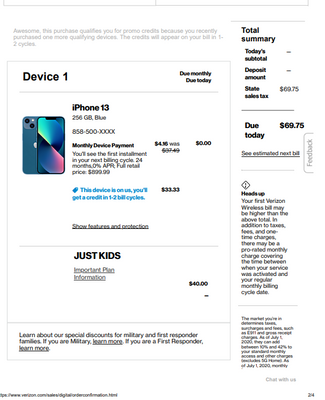 That was I saow and ordered received confirmation then I learn that promo does not apply.  I am glad I check/verify the promo otherwise I would end up paying 800 for the phone.   No mistake on my part but verizon did not handle well.

By the way, agent did not believe me and did not want to see the order confirmation.  I offered to email and share it anyway agent wants.  I attached the confirmation from verizon siteand final confirmation printed after order completed. (see above)    Anyway,  now I am trying to cancel it. I am told its is cancelled and did not receive any confirmation about cancelation.   I have been verizon customer over 20 years and this is the first time I am frustrated with order process.

Just a I update: Talked to multiple agents, I am told order is canceled. I did not receive confirmation. I called again and I am told it will be cancelled again. Instead I received email that phone is shipped. I have tracking and phone is on the way.  New line is created on my account with no PROMO. I called again and I am told again it will be cancelled. I have been asking to talk to manager who has power to solve to issue and also wanted to complain about process, but agent is not allowing and trying to solve the issue.  So far this is not resolved.  Initially, I wanted to upgrade 2 lines and add 2 lines, instead I am cancelling. This is bad for verizon and it is very frustrating for customer. Very bad misleading order management.