Mobile solutions
Home solutions
Get up to $500 when you bring your phone. Plus, waived smartphone activation fee when you buy online. Limited time offer.
$500 via Verizon e-gift card (sent w/in 8 wks). Activation of 4G LTE/5G phone on One Unlimited for iPhone (all lines on account req'd on plan), 5G Do More, 5G Play More or 5G Get More plans req'd. Device must remain active for 45 days. $500 charge back if service cancelled w/in 12 mos or eligibility req's are no longer met. See vzw.com/bring-your-own-device for details. And for a limited time, we’ll waive your activation fee when you order through vzw.com or My Verizon app. You’ll see the one time charge waived as your “Due Today” amount at checkout.
end of navigation menu
Help
Sign in
Turn on suggestions
Auto-suggest helps you quickly narrow down your search results by suggesting possible matches as you type.
Showing results for
Search instead for
Did you mean:
More Options
Correct Answer!
Verizon really sucks!

Upgraded another phone at the first of July and added insurance on two separate lines (one IPhone 5C) Dropped IPhone today and insurance was never added to the phone, but was to other phone. Verizon did not add insurance to both lines, like they were suppose to do. So I now have no insurance to replace phone. My question to Verizon was why it was added to one and not the other, too? There response was they have no notes stating anything about insurance. So why was it added to one and not the other then? They can't answer. Does anyone know who I can talk to, customer service representatives say there is no one higher up to talk to?

Labels (1)
Labels
I have the same question
1 Like
Reply
8 Replies
Correct Answer!
Re: Verizon really sucks!

I apologize that this happened to you, Joanna. Its terrible to have a damaged phone and then finding out that there is no insurance on it. Was this the phone that you just uipgraded to in July? Did you previously have insurance on this line?  Do you have an alternate phone that you can use until this can be resolved?

I did not have insurance prior to upgrading in July. So when I upgraded I told the customer service representative to place insurance on both of my phones, which did not get done (only on the upgrade). I found an archaic phone that I had to transfer the damaged phone to. Just do not know who to call/talk to about this (no customer service representatives (at least the ones I talked to) will give me any numbers, etc.

You have to put insurance on your lines within 30 days of purchase, UNLESS you do it during an open enrollment period, which I think is usually in the spring. Of course, the rep should have told you this at the time you requested it, but it is the underwriter (Asurion) who establishes these terms. If the rep had added it to the line, Asurion would have denied coverage and it would have been removed, just as Asurion has coverage removed from lines with two claims in one year. Perhaps the rep added it and it was removed other by Asurion, so the rep thought it had been added. In any case, it's pretty unlikely you will get any sort of compensation here. Whenever I change something on my account, I check My Verizon the day the change is to take effect, so if there is any kind of issue with it I can deal with it promptly.  Even if you had insurance, there is a deductible and I believe it is $199 for iPhones, so you would have had to pay that anyway. An expensive lesson all around.

Insurance was suppose to be added to both lines.... by customer service representative. No, it would have only cost me about $40 to replace. Now almost $300. This had nothing to do with Asurion!

........No, just like auto insurance, cell phone insurance has a deductable.  Asurion has a $199 deductable if you have a claim in the first 6 months.

And if you have owned a phone more than 30 days Asurion wil NOT allow insurance, even if Verizon requests it.   Verizon doesn't insure the phones.  All cell carriers use Asurion for insurance.  Verizon is only a go between. 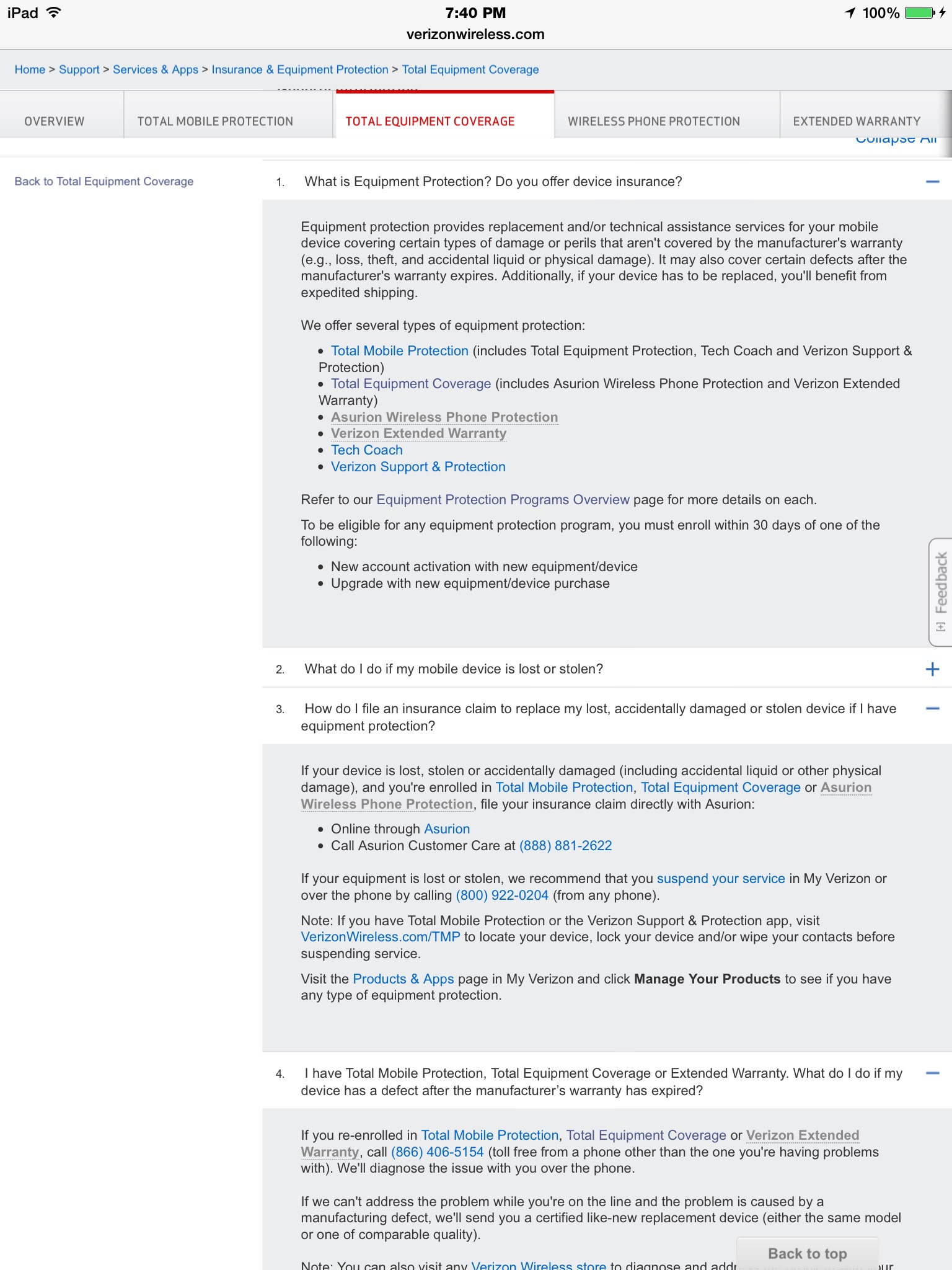 Assuming you added insurance the day you bought the phones (which would have been within the first 30 days) something else you should have looked for was the fee associated with it. I'd guess most people ask for a rough estimate of their bill and had you added the fancy insurance that is $11 a month, seems like you would have noticed it was missing. Just because you added it on one phone, doesn't mean they will automatically add it to another. For instance people who have children with phones often add it to their phone, but not their own.

That said, what is broken on the phone? Apple will replace a screen for $119 ish (depending on the model) which is usually the outcome of simply dropping a phone. Or did you drop it in a vat of lava? Water? Dog poo?

Asurion is the ONLY insurance Verizon offers. The deductible for Asurion is definitely not $40...but $40 IS the upgrade fee on a new two year contract. And it certainly does have something to do with Asurion. If the coverage was requested via Verizon customer service, Asurion would be the underwriter. There isn't another one that provides coverage directly through Verizon. In fact, Asurion is the underwriter for nearly every cell phone insurance offered by the carrier. Having said that, if you went to an indirect retailer and THEY offered coverage through them, your issue is with the store you made the purchase and request. Third party retailers do sometimes offer their own plans, with different terms and procedures than Verizon. You MUST return to the store where the original purchase was made to submit a claim. No matter how many times you call Verizon, they can't see a policy like that because they did not offer or sell it to you; and they certainly can't file a claim on your behalf. Find out WHO EXACTLY is the insurance underwriter by going back to where you bought the phones.

One thing that strikes me off is that if you were indeed told in-store you could add insurance to your other line, I would assume you bought that phone at the same store. Another thing since you said it is an iPhone 5c you want to make a claim on...is it AppleCare you wanted? Or who is the actual insurance company on the info provided at the time of sale?