end of navigation menu
Ask a question
Sign in
Sign in
Turn on suggestions
Auto-suggest helps you quickly narrow down your search results by suggesting possible matches as you type.
Showing results for
Search instead for
Did you mean:
Show all
630 Members online 254K Discussions 42.2K Solutions
More Options
Correct answers are available for this post.
Ordered Verizon Pixel 6 Pro via Google Store
trip6kitty
Enthusiast

Ordered a white 256gb Pixel 6 Pro via the google store, but I chose to finance and trade in my device via Verizon because I want the $350 trade in value for my old Pixel 4XL.  I received the email from the google store telling me to go to verizon.com/tradein before 11/3/21 to trade in my old device.  When I do, I don't see my 4XL (only very old devices from years ago).  I have to manually enter my Pixel 4XL via IMEI number, then I am only offered $140, not $350.

Is this because I currently have a trade-in Order on my verizon account?  I tried to cancel it, but it gives me an error "Locked Location-Order-Device combination not found" in orange at the top.

I originally tried to order the Pixel 6 Pro via verizon, but my order was cancelled because my payment method for the phone was Paypal and customer service told me it has to be a physical CC card, so they cancelled the order.  I still see my trade in Order still under My Orders.  Is this Trade In Order "blocking" me from getting the full trade-in value when I am trying to manually trade in my phone after pre-ordering via the google store (but I still chose to finance/trade in via Verizon; see screenshot). 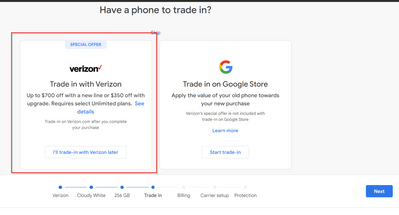 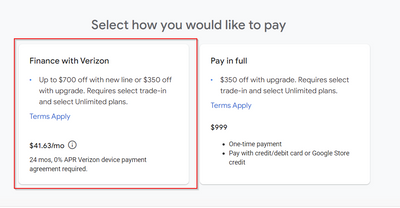 This is a screenshot from my email: 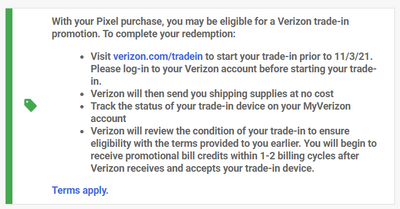 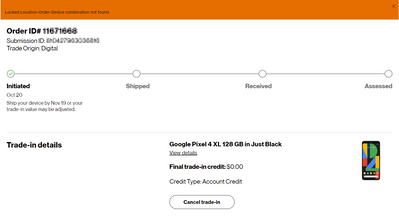 We want to make sure we have all the details to fully assist you.  A private message is being sent now to assist you further.-Sean

The link you sent me does not work, please send another one that works.

1 Like
Reply
Correct answers are available for this post.
Re: Ordered Verizon Pixel 6 Pro via Google Store

Hey did you get this resolved?? @trip6kitty

Yeah. Apparently I'm still going to get the full $350 off my bill as credits over 24 months.