Mobile solutions
Home solutions
Get up to $500 when you bring the phone you love. OR get iPhone 13, on us. Online only. With Select 5G Unlimited plans. Ends 1.31. Buy now

end of navigation menu
Ask a question
Sign in
Sign in
Turn on suggestions
Auto-suggest helps you quickly narrow down your search results by suggesting possible matches as you type.
Showing results for
Search instead for
Did you mean:
Show all
761 Members online 254K Discussions 42.2K Solutions
More Options
Correct answers are available for this post.
Prepaid Unlimited Jetpack 7700L: Abysmal data speeds during lockdown
CMayo
Enthusiast 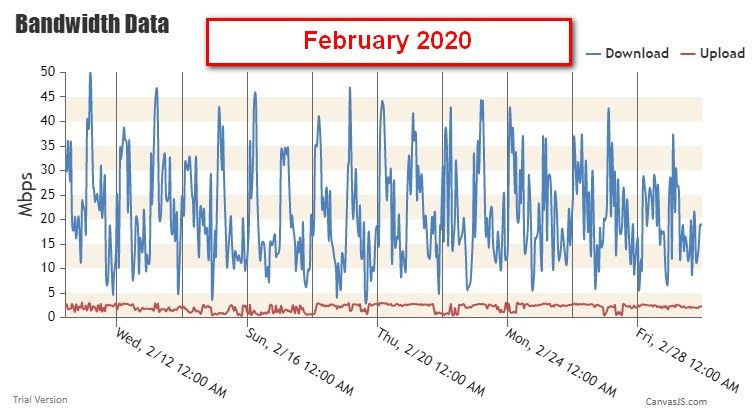 Since March 17, 2020, my throughput has dropped drastically, often into the low Kbps range during the day. 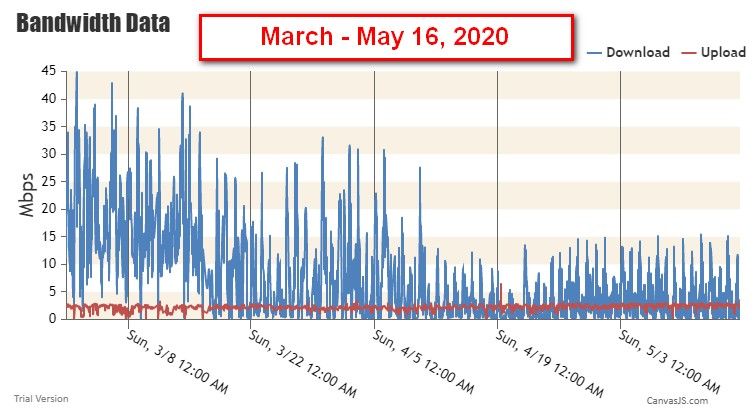 Signal strength and SNR haven't changed, and I've assumed my slow throughput just reflects more people staying home and using data during lockdown, but I'm not seeing the uproar I expected on the forums so now I'm wondering if it's just me.

So is this a common issue related to the lockdown, or should I start troubleshooting my setup?

1 person had this problem.
I have the same question
0 Likes
Reply
9 Replies
Correct answers are available for this post.
Re: Prepaid Unlimited Jetpack 7700L: Abysmal data speeds during lockdown
CMayo
Enthusiast

I am having the same problem since the lockdown. I have to home school my grand daughter and am worried about her being able to get online now. Rural area, not much options and I know the Sat internet won't handle it.  So frustrated.  I have the grandfathered in prepaid plan and this is so irritating.

I picked up this plan after Viasat crippled my 150GB plan that they apparently decided wasn't so profitable after all. Verizon Unlimited was perfectly adequate for a year but now, the only times I have a decent amount of bandwidth (3Mbps-12Mbps) are between 1:00 - 8:00 AM. Weekdays are marginally usable but forget nights and weekends.

Only reason I don't pull the plug on Verizon and go back to Hughes or Viasat is that I'm hoping Musk's Starlink will be available before too long and I'm hoping they'll actually provide a reasonable service level at a fair price. My kids in town are paying $70/mo for gigabit internet, I'm paying Verizon the same $70/mo and getting garbage... 0.30Mbps at the moment.

CMayo - Sorry to learn you are having issues with your coverage. Have you reached out to us to troubleshoot? If you have not, we sent you a private message here in this forum.

I did reach out to support... again... and then again last year in 2021 and after being shunted to prepaid support ("Oh, sorry, you're a PREPAID customer? Yikes! You need to talk to these other people") and cooperating with their lengthy, bone-basic, scripted (and useless) troubleshooting steps for the better part of two hours... again... nothing changed.

I kept telling people, send a truck to my road and measure the throughput, then go fix whatever piece of your gear stopped working last year, but no... that was too much trouble, I guess.

So today, two months shy of two years after my service went south, boom, my bandwidth is back. 14.6Mbps now, 6-15Mbps earlier in the afternoon, and I'm not holding my breath, but it looks like, after two miserable years, somebody finally noticed, "hey, the confrabulator is fried on that tower over in east Texas" and bolted up a piece of new gear.

Whoops! Spoke too soon. Everything's back to normal today,

That's more like it, Verizon! Unlimited data for all!!!

This (still ongoing) issue came up in conversation with a visitor a couple of weeks ago and when I mentioned that I thought it unlikely that a rural cell in an area of extremely low population density was so overloaded that the entire area's available bandwidth all but disappeared, he suggested that Verizon had simply allocated most of our bandwidth to the city which, I imagine, really had become congested with the pandemic.

I wonder if anyone at Verizon is paying attention to the fact that things are largely back to normal, load-wise, and maybe they could now give us back some of that bandwidth? Just a thought.

I like the way you think, CMayo, and I'd like to gather some details about your concern ASAP and make sure that we're giving you "all we've got" (Star Trekie here)! Please send us a Private Note so that we can speak in private and share information, okay? *Stephannie

I have to admit, you got me pretty good that time! Of course, we just wound up spending another pointless 2.5 hours troubleshooting my equipment after I have demonstrated time and again that this issue it not related to my equipment; it has survived three jetpacks and three cellphones, and is consistent across Verizon data, wireless and Straight Talk Red wireless accounts. On April 29 you told me I needed a new SIM (which was better than the time you told me I needed a new Jetpack. That was pretty funny, too!) and after more than six weeks, the new SIM you said I needed and promised I'd have in seven days (Order Number and Location Code: Order# 526362 Loc Code: D105901) still hasn't arrived.

But don't bother, because I'm not interested in wasting any more time being "handled" by Verizon tech support. As my first graphic illustrates, your signal was drastically reduced around May 16, 2020, then again around April 10, 2020. As today's attachments (and my repeated anecdotal evidence) illustrate, the same equipment (Samsung phone WiFi'd to 8800L Jetpack) tested in my driveway and in a small town 15 minutes later should be proof enough that my gear is not to blame. 0.25Mbps at home, 24.2 Mbps in town.

My theory? Verizon knows they re-allocated this rural area's bandwidth to supplement more dense population areas during lockdown, couldn't care less, and doesn't have the least intention of restoring us to our previous levels, so why would they bother sending a truck down my street to test bandwidth throughput?

Pity they haven't also cut the price of my hilarious "unlimited data" sub-megabit plan (where my evening and weekend hobbies now include watching webpages fail to load) but really, why would they as long as customers are still paying for the service?

Side of the road in Quinlan