Help
Sign in
Turn on suggestions
Auto-suggest helps you quickly narrow down your search results by suggesting possible matches as you type.
Showing results for
Search instead for
Did you mean:
More Options
Correct Answer!
Where's the global/maintenance update

I spoke to an HTC representative along with speaking to a Verizon representative; However, wheres the update for the HTC Rezound as promised that has global capabilities and bug fixes for the Ice Cream Sandwich OS operating system.

My phone is somewhat fine but it would be nice to have a patch update!

What are your thoughts and ideas?

I have the same question
0 Likes
23 Replies
Correct Answer!
Re: Where's the global/maintenance update

HOW DARE YOU ASK FOR SOMETHING VERIZON ADVERTISED AND STILL ADVERTISING? It's Verizon we are talking about here. They are here to make money, not pay attention to some POS customer by making some effort to keep its own promise made to the customer. GET REAL!! 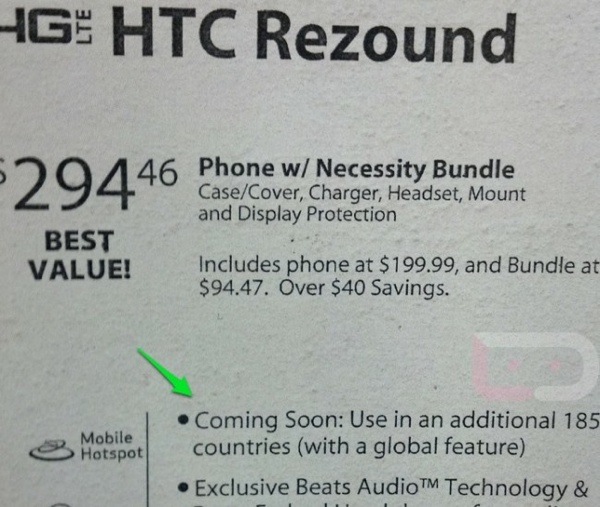 Soon is so subjective...  Soon could me 1 second from now, or until the end of time.  There is no time frame or hard date.  Didn't HTC give a "estimate" time frame, but ended up delaying which pushed all other devices they were working on to a later date?  I believe it was the Amaze cause the delays?  Been a while keeping up with HTC devices.

Yeah.. except Verizon has been advertising this pretty much since Rezound came out. Rezound will reach EOL soon - I don't know when Verizon plans to deliver on their promise.

It's not up to the carriers like people think.  Manufacturers have to start submitting updates.  If HTC has submitted updates then you would have a case, but from the looks of HTC release schedule they pushed a lot of devices 4-5 months behind since the Amaze.  So I don't see HTC submitting anything right now for the rezound.

Actually, carrier has a LOT of say on future updates. Even after an update is submitted to VZW, Verizon has to engage its own resources to test the update - and often times if something is not at the top of the priority list, it won't get attention. The Verizon apps are NOT developed by manufacturers and Verizon also has to test the compatibility of these apps with the new update. If VZW doesn't see immediate $$, it's not a priority.

Like I said before...  HTC has to SUBMIT something first.  If nothing is submitted then Verizon has NOTHING to do with it.  Think about it.  HTC has DELAYED numerous devices on all carriers for one reason or another.  All starting with the Amaze.

So until you show me where HTC has stated they have submitted something to Verizon it is still on HTC's court.

For argument's sake, let's say you are right and HTC hasn't provided the update to VZW. Still, it's NOT something the customer should care about. VZW can sort things out with HTC on their own (and it must it that's the case) and it's VZW which must deliver on the promise.

No HTC must deliver what is promised...  I won't type the long drawn out essay I wrote before.  Let's just say there have been multiple documented cases where the MANUFACTURER is liable for any/all specifications of the device.  If carriers were liable for the specs.  Apple could sue carriers for selling devices that infringe on their "patents" for example...  Think about it...

Just for reference.  Motorola Cliq which I was apart of.  1 year was well beyond within reason for me.  T-Mobile said "That is what Motorola told us", Motorola said "We are waiting for drivers".  Guess who did the judge blame.