Mobile solutions
Home solutions
Have a phone you love? Get up to $500 when you bring your phone.
$500 via Verizon e-gift card (sent w/in 8 wks). Activation of 4G LTE/5G phone on 5G Get More plan req’d. Device must remain active for 45 days. $500 charge back if service cancelled w/in 12 mos or eligibility req’s are no longer met. See vzw.com/bring-your-own-device for details.
Help
Sign in
Turn on suggestions
Auto-suggest helps you quickly narrow down your search results by suggesting possible matches as you type.
Showing results for
Search instead for
Did you mean:
More Options
Correct Answer! Jump to solution.
KitKat update killing battery

With moderate usage, I usually end the day with about 60% left on the battery. After installing the KitKat update at 8 a.m., I am now down to 63% on the battery less than 2 hours later, and I suspect I will have to turn off the phone to ensure I have enough juice for the trip home. Location is turned off, I've updated all the apps and rebooted. Otherwise, I basically haven't touched the phone and it's still sitting there draining. What's causing this, and what can I do? This is immensely frustrating. 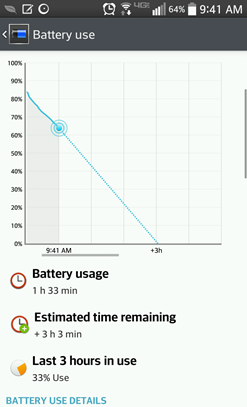 Just to update - went into the Verizon store down the block from my office, and they were unable to figure out what was running the CPU continuously. So, as a last resort I did a factory reset and it has been fine since then. Still getting things set back up the way they were, so if it starts happening again I'll have a better idea which app might be the problem.

KitKat is supposed to increase battery life and in fact my G2 has seen better battery life since KitKat. You know you phone will tell you EXCTLY what is using up all your battery. Right under Battery Use Details.

See if a few charge cycles helps you too.

You could always perform a Factory Reset after backing up critical stuff.

I am having the same problem as well as performance issues and my texts take forever to send and at time don't send at all unless I reboot the phone.  Chatted with Support this morning who had me perform updates to whatever apps needed updates as well as try using the phone in Safe Mode.  This has not helped.  Battery was charged last night and earlier today and it's already to die again... very frustrating to say the least.  Waiting to chat to support again.

Run battery down.  Turn off, and then charge fully.  The battery stats will reset.

I'm trying that. The initial charge after the update only lasted to 5 hours, so I turned it off and recharged. Turned it back on and the problem is the same. Will charge it again tonight after it runs out (currently down to 25% after 4 hours on standby) and hope for a miracle in the morning. Like another poster mentioned, I'm also having problems with sending and receiving texts. When I send, the message just hangs and eventually clears after 5 or 10 minutes, but the recipient gets 4 or 5 messages of the same text. And the phone is running much warmer than before, I can feel it in my pocket even though it's in a case. Probably related to this, everything seems to be running more slowly.

I'm utterly frustrated. None of these problems existed before the update, but I bought into the early reviews of faster performance etc. and didn't think twice about installing when I received the notification. Won't make that mistake again.

Also, my WiFi is on constantly even with no apps running. I tried wiresharking my packets but nothing showed up. Just the icon for Wi-Fi states that it is tx nd rx constantly. I'm down 2% battery on the time it takes for this post.

People are probably not going to like the suggestion, but when an upgrade results in bizzare or unwanted behavior, the easiest, or perhaps even the only recourse may be to perform a Factory Data Reset after backing up your phone's storage to a PC, and copying down important settings for things like email, or online banking, etc, or just copying down what apps you downloaded and where you stuck icons.

Sometimes an offending program can be identified, perhaps uninstalled and re-installed, or perhaps it's cache cleared, and then it behaves, but not always.

I think upgrades are meant ideally to work and leave you as you were but with an updated OS. But it's possible, some programs, processes end up referencing memory that's not initialized properly, and only by doing a FDR is the phone set to a state that is deterministic. There are simply too many variables on what has been downloaded, installed, uninstalled, etc across the user base on all devices, and simply too much complexity to guarantee 100%success for all users, all devices.

Personally, in the past, having multiple phones and experiencing multiple OS updates, maybe 60-70% happen without me having to perform a FDR. I'm lucky this time with KK, but others have had problems, and FDRs have generally cleared those problems. The 30% of the time I had to do an FDR, the results were satisfactory, but I did have to do some work to get my phone back to a state I had it configured previously, and I know that isn't fun.

I bet this is what VZW or LG are going to tell you to try. Backup your photos and your music and other downloaded content that is important to you. Capture your account names. I think if you had it set properly, your contacts should be backed up on Google's servers.

Thanks, you may be right. As it is I've installed the Windows 8 drivers and I can't view my files on my phone. I keep getting the vz installer folder but can't browse dcim etc to get My photos or videos off. Also, when I've tried copying my videos off in the past they always get ruined because they are in a different format. Any thoughts on these issues?