Mobile solutions
Home solutions
Have a phone you love? Get up to $500 when you bring your phone.
$500 via Verizon e-gift card (sent w/in 8 wks). Activation of 4G LTE/5G phone on 5G Get More plan req’d. Device must remain active for 45 days. $500 charge back if service cancelled w/in 12 mos or eligibility req’s are no longer met. See vzw.com/bring-your-own-device for details.
Help
Sign in
Turn on suggestions
Auto-suggest helps you quickly narrow down your search results by suggesting possible matches as you type.
Showing results for
Search instead for
Did you mean:
More Options
Correct Answer!
Galaxy Nexus Antenna Issues

Let me just start off by saying that I love this phone; android 4.0, the process speed, the RAM, etc.  Everything about it, EXCEPT my signal quality.

In places where I had been able to make phone calls, send text messages, and surf the web with my old 4G Thunderbolt, I now consistently get "can't connect to network" and am unable to do any of the three previously mentioned things.  I understand that Verizon has noted there is an issue with the software, in that the number of signal "bars" is not accurately shown at the top of the phone.  However, when I'm looking at the actual signal strength in dBm, it is CONSISTENTLY lower than every other 4G phone I've looked at.

Not less than an hour ago I went into a Verizon Wireless store to replace my sim card in my phone; tech support sent me a new one to try and fix my problem.  Every 4G phone in the store was hovering around a nice -70 to -85dBm while connected to the 4G network, but my GN, as well as the GN that was on display at the store, was -110dBm and occasionally lower.

Everyone that I've spoken at Verizon has denied that they know anything about a signal issue with this phone, but a quick Google search of "Galaxy Nexus Signal Issues" would argue otherwise.  There also seems to be an issue switching from 4G to 3G, which results in a complete drop of service for a while, and then limited to no connectivity on the 3G network.

Is anyone else having these issues with their new Galaxy Nexus, or did I draw the short stick on this one?  So far, the signal quality on this phone has been the worst I have ever had with a smart phone.

Here is what I was getting at the Verizon store today on the Nexus: 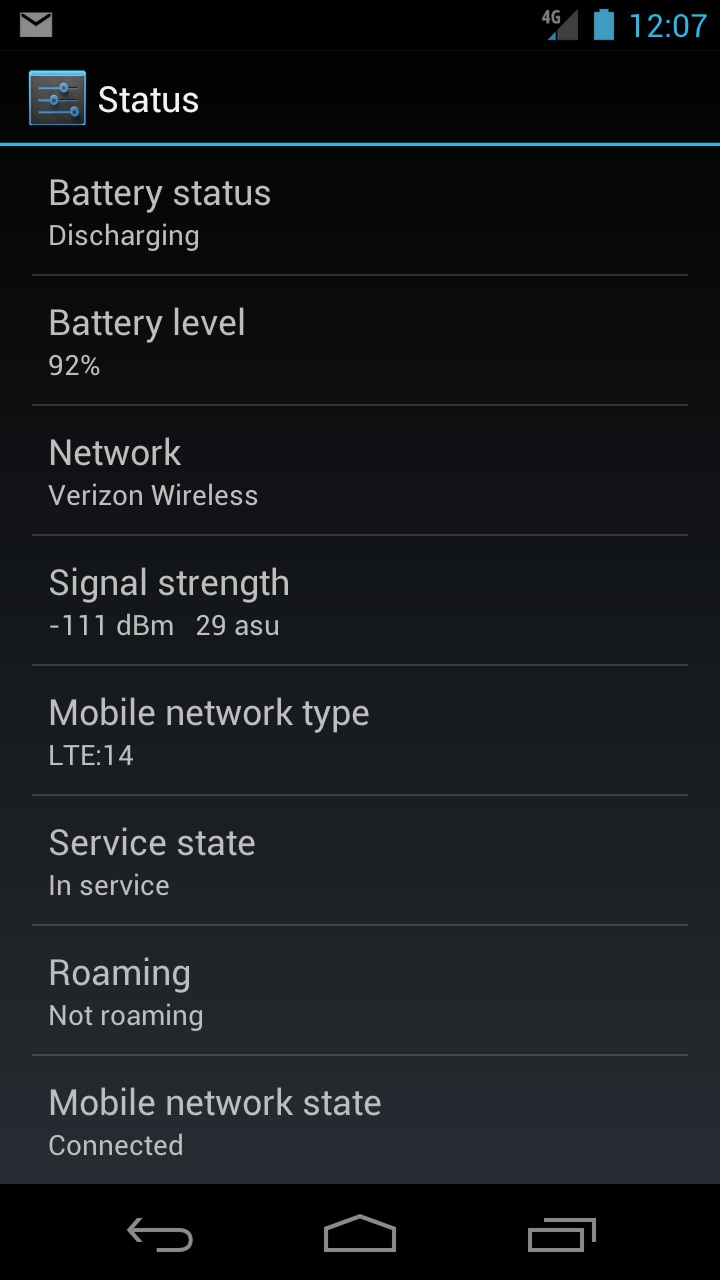 Here is one of the HTC 4G phones in the store: 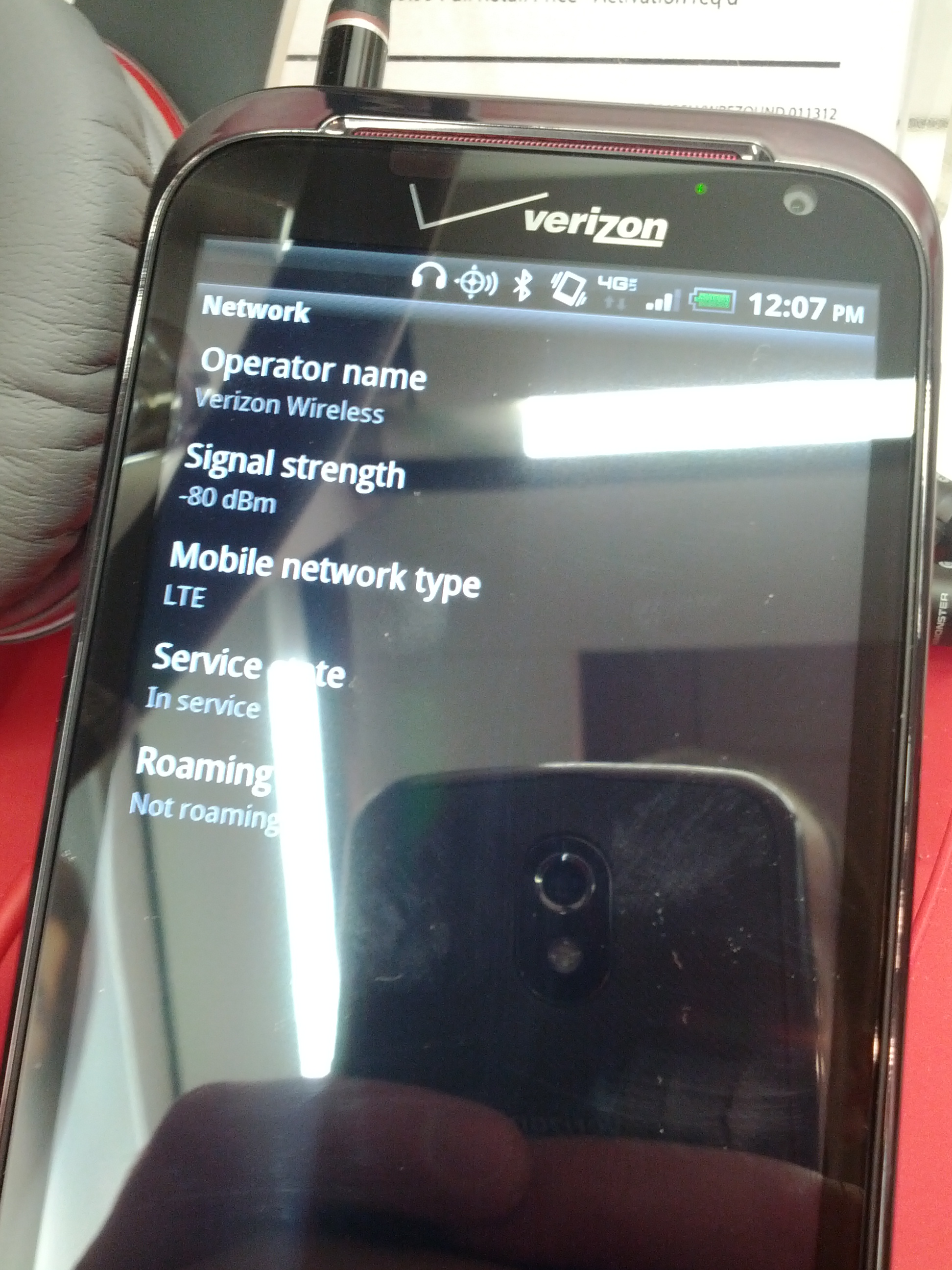 I see the writer's argument there.  I compared the same two phone is my own test, the Bionic and the Galaxy Nexus.  I had a road trip with my coworker (who owns a bionic) into and out of buildings on a college campus throughout the day.  Consistently, his Bionic was able to make/receive phone calls and send text messages no matter where we were, whether it was near a window, or in a basement.  My Galaxy Nexus was not able to make a single phone call from within any building.  And after going back outside, away from any structure, I had to reboot the phone to connect back to one of Verizon's towers.

Also see the 3rd paragraph in my post above.

None of this makes any sense, other than pointing to Samsung using an inferior antenna.

Too bad you didn't return it...  You had until January 15th to return and change out your device or get your upgrade back.

I could tell you why you are having trouble, but it's kind of a moot point as there is not much you can do.  It has nothing to do with the antenna.  If it was the antenna then EVERY Galaxy Nexus should be having trouble.  All 4G devices right now suffer from the same thing and some feel it more than others depending on device, tower configuration and region.

I went by Verizon first thing on the 15th and returned the Nexus and all accessories.  This was the absolute worst phone I ever carried in the 21+ years of having a cell phone!  Switched back to my trusty Thunderbolt.

I was having one--way audio issues and poor signal quality as well.  I could no longer make calls in places where I never had trouble before.  I carry a Moto Bionic for work and would have no problems making a call on it while standing in the exact same place.

Until someone formally acknowledges an issue with this device and fixes it, I would NOT recommend this unit to anyone!!!!!

I really havent had the issues you talk about, but i am in an area with great signal most of the time. I did noticed better radio performance with 4.0.2, and 4.0.3 is supposed to be even better.

Comparing 4g dBm to 3g dBm is pointless. The 700 mhz spectrum towers will have a larger operating area as the lower spectrum will reach further out. Vzw is rolling out this network as we speak and some areas will have stronger signal than others. Try switching your radio to cdma in fringe areas.

Samsung radios arent known for great signal, see droid charge, but so far i get and average of 30+mbps download and 15+ upload