Mobile solutions
Home solutions
Have a phone you love? Get up to $500 when you bring your phone.
$500 via Verizon e-gift card (sent w/in 8 wks). Activation of 4G LTE/5G phone on 5G Get More plan req’d. Device must remain active for 45 days. $500 charge back if service cancelled w/in 12 mos or eligibility req’s are no longer met. See vzw.com/bring-your-own-device for details.
Help
Sign in
Turn on suggestions
Auto-suggest helps you quickly narrow down your search results by suggesting possible matches as you type.
Showing results for
Search instead for
Did you mean:
More Options
Correct Answer!
5G coverage map is not true

I just bought 3 new iphone 12s and upgraded my plan to an unlimited from a VERY old plan that was extremely generous and CHEAP.  I've now spent about $1500 on phone upgrades and increased my monthly plan by $100/month.  I had to go to do more unlimited as I need the mobile hotspot (I had that with my old plan).

The verizon map shows my area in Leander, TX SOLID red 5G (not UWB) coverage.  I called and got an advanced tech and they told me the tower close to me is NOT 5G enabled yet.  So, in other words, the coverage map I used to make my decision to literally spend 1000s of dollars is a complete lie.

Is there someone that can look up the tower upgrade timeline and tell me if/when my tower will get upgraded?  If not, I may take all this back to the store and tell them to stick it and go with another carrier.  This is straight up false advertisement.

I have the same question
0 Likes
Reply
8 Replies
Correct Answer!
Re: 5G coverage map is not true

I just went out in the car to verify.  The location is along bagdad road in leander texas.  The official Verizon coverage map shows solid red 5G all along bagdad road and well east/west of me.  It continues all the way north to Liberty Hill.  Driving south along bagdad, 5G picks up about 3 miles south of me as it jumps to another tower.  Turn around and come back and about a mile from my house the coverage switches back to 4G LTE.  I had my phone set to 5G ON rather than auto to force it to connect.  This is my map according to Verizon's offical coverage.  COMPLETE 5G according to the map. 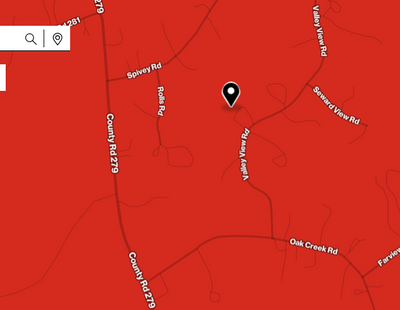 Yep, the 5G Nationwide map is a complete lie....

How is this legal?

The carriers often hide behind disclaimers that the map only shows outdoor coverage. It may be true that 5G is there, but you have to be above the tree line or out of the signal shadow created by say, a mountain or building. The maps are computer generated so, it's possible they didn't get generated with a lot of precision, or based on the actual engineering data.

It could also mean that Verizon has 5G ready equipment on the tower, but needed to turn it off due to a technical problem. For example, in my market, Verizon has a lot of towers with 5G surrounded by towers without 5G. I can tell by looking at the sites and using a tool called CellMapper, as well as Samsung Band Switcher to lock my phone to the 5G NR + 4G LTE Anchor band. Some towers are in need of new antennas/radios because they aren't using a newer "Remote Radio Unit" design all of the carriers (including Verizon) have switched to. Some towers are in need of backhaul upgrades, so I've heard from Verizon techs in the area. Some towers are just so old, they don't broadcast more than Band 13 and Band 66, and don't do LTE-A... and these towers in particular, are the ones causing trouble. You'll find many of these in rural areas, sometimes in urban and suburban areas.

A tower near me had 5G enabled for all of 5 days before Verizon shut it off, and that's likely because it sits a mile from a Microcell, and a "pre-historic" tower that last saw upgrades in 2012. Connecting to the Microcell and that "pre-historic" tower was a nightmare. You might have 5 bars of LTE, but speeds were less than 1Mbps in both directions. Or the phone would stay locked onto 5G and you'd be left with a 1 bar barely usable signal anyways. When 5G was turned off, all of a sudden network performance went back up - 20Mbps on the "Pre-historic" tower and 50Mbps on the Microcell. Where towers have been upgraded, it's smooth as butter going between multiple towers, data speeds are high (100+Mbps) and I don't see strange problems.

The 5G NR network is less than a year old, so it's likely needing time to get up to meeting the coverage map in performance. Between the silicon shortages, the lack of infrastructure upgrades across the country on ALL providers until recent, and the fact that there is high demand on labor for Fiber and Wireless installers and engineers, it's taking time. But I do agree - understate rather than overstate. It sets a better expectation and the negative press about lacking coverage is better than negative press about 5G not existing where it should be.

1 Like
Reply
Correct Answer!
Re: 5G coverage map is not true

do you still have an LGv50 and have you ever gotten a 5g signal on it?

That is the precise reason why I waiting to upgrade to a 5G capable phone or even switch my plan to allow 5G connections. Even if I eventually upgrade my phone to one that is capable 5G, it will remain turned off for the foreseeable future.

Yeah, I mean, getting the 5G phones do have benefits especially if you're coming from something really old. For example CBRS access, higher LTE carrier aggregation rates, and so on. At least since my last post, I haven't seen much progress if any on the 5G expansion in my area, except for a couple towers getting the 5G signal turned on and Verizon rolling out the 5G Home service to a city without FiOS and not too far from home. Some of the really bad towers are still really bad - they're bad with a 5G phone, and bad with a 4G phone. But I am seeing what seems to be improved backhaul starting to show up on towers, which is having a net benefit. Specifically on the towers with 5G enabled, speeds are improving and the mobile data is starting to feel more steady.

Replying to my previous post since the Edit period is over with. I should also point out on the sake of this topic, that Verizon did re-do their coverage map for my area with the 5G coverage. It actually reflects very closely of what I've mapped using the CellMapper app on Android. It seems Verizon is aware and is actively adjusting the map based on how they have the towers configured. With that said, there are still some discrepancies between the CellMapper data and Verizon's Map. Specifically, CellMapper seems to "overstate" in some instances only because it is measuring the REAL outdoor signal, and it is also stating 5G coverage in some spots where Verizon has turned the 5G off for technical problems.

Verizon seems to overstate a little in more rural areas where 5G "appears" but refuses to switch to NR mode, so there's still some "This or That" at play with the map and what the phone actually gets.