Mobile solutions
Home solutions
Have a phone you love? Get up to $500 when you bring your phone.
$500 via Verizon e-gift card (sent w/in 8 wks). Activation of 4G LTE/5G phone on 5G Get More plan req’d. Device must remain active for 45 days. $500 charge back if service cancelled w/in 12 mos or eligibility req’s are no longer met. See vzw.com/bring-your-own-device for details.
end of navigation menu
Help
Sign in
Turn on suggestions
Auto-suggest helps you quickly narrow down your search results by suggesting possible matches as you type.
Showing results for
Search instead for
Did you mean:
More Options
Correct Answer!
Executive Relations

So I know there are a lot of people just asking for Executive Relations, maybe because they are mad, or because they just want to get what they want. Then you get someone like me, been with Verizon on and off for 20 years, each time I left was because Verizon dropped the ball on a false promise or gaurantee. This is now my third time back with Verizon, this time by no choice because I live in an area where only they work. Now to get to my issue.

Issue - I signed back up with Verizon back in July, I took advantage of a promotion that gives you $450 of credits per line per trade in. That in my situation came out to a $18.75 billing credit per line toward my easy pay plan for each phone. It's December, and I still have yet to start receiving said credits. I've spoke to Verizon Customer Service now 4 months in a row, spent an average of 2 hours per phone call just to be promised and gauranteed the issue will be taken care of. I am now up to a full day in hours on the phone in total, and nothing has been accomplished. I was told to take the issue up to Executive Relations, was given a URL of verizonexecutiverealtions.com and then to submit an email. URL is not real and there is no email. I need this to be forwarded to where it needs to be so I can get my issue taken care of.

Resolution - So there has been now 2 forms submitted on my behalf to get the credits I deserve and it seems that both forms have been lost or just thrown away or maybe even used as toilet paper, I have no idea. The resolution up to this point is up to Executive Relations, where ever you are.

Please, if you wouldn't mind, I don't feel like spending much more time on this issue that should've been taken care of now 3-4 months ago, so a nice speedy resonse will be nice.

1 person had this problem.
I have the same question
0 Likes
Reply
3 Replies
Correct Answer!
Re: Executive Relations 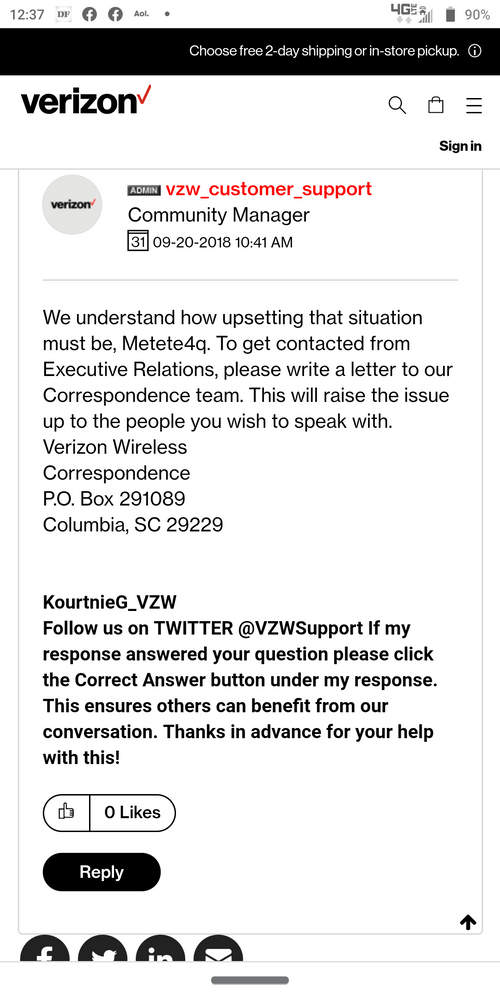 I apologize, but this seems to be the usual response from anyone, and it's not the correct response. I was told that there is a URL or e-mail by one of the supervisors in the customer service team, that's what I'm looking for, so please don't reply with anything else.

There isn't an email address for VZW customer service.

The executives of VZW are listed somewhere on the internet, but I won't post them on the forum.